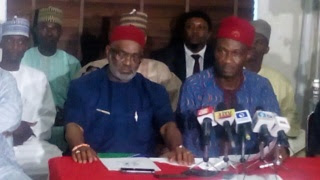 The Peoples Democratic Party (PDP) is back as “one family”, a member of the Ahmed Makarfi led National Caretaker Committee, Senator Ben Obi, confirmed this development a while ago.

Senator Obi spoke with newsmen ahead of a joint press conference billed to be addressed by Senator Ali Modu Sheriff and Senator Makarfi.

Obi, who was flanked by another PDP chieftain from Sheriff’s camp, Dr. Cairo Ojougboh, said both leaders have reconciled and would now set up a joint committee. His words:

“We have decided to issue a joint statement. As we speak today, the PDP is back as one family. The two leaders will address you gentlemen of the press. They will constitute a joint committee with the support of all relevant organs of the party.”

Makarfi, Sheriff Releases Statement
In a statement jointly signed by Sheriff and Makarfi, the two leaders agreed to consult with other organs of the party for a final resolution of the crisis that has engulfed the opposition party.

“This is without prejudice to all outstanding matters in court. At a meeting held this morning between the two of us, a holistic review of the state of affairs of our great party, PDP, was deliberated upon.

“In reviewing the crisis that has engulfed our party since the loss of the 2015 general election after 15years of uninterrupted leadership at the centre, it became obvious to both of us as principal actors that it is time to heal the wounds. And bring about a united, focused and constructive opposition party that can bring sanity to our democratic process. Bringing relief to the teeming supporters of our great party and to the benefit of our great country.

“Based on the above, we have both agreed to: Consult widely with all relevant organs of the party; Set up a joint committee that will carry out a holistic reconciliation of all aggrieved segments of our party across the country and in Diaspora; Pursue the vision of the founding fathers of our great party.

“Details of all the above will be made public soonest. We therefore call on all party members to remain calm and refrain from any actions and utterances that could further bring about divisions or dispute in the party”