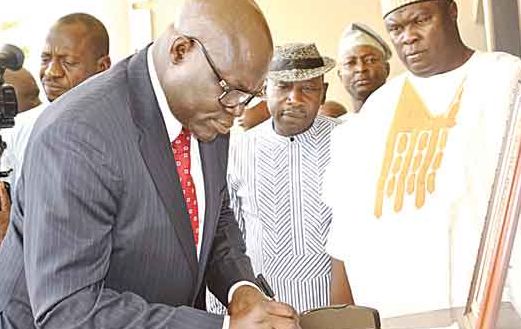 Here Reuben Abati was signing the condolence register of one of their “many” colleagues who died in Aso Rock, Daniel, the former Chairman of State House Press Corps.

Written by Igboeli Arinze
I read with wonderful bewilderment Reuben Abati’s recent article titled “The Spiritual Side Of Aso Rock Villa” which was supposedly an expose on the influence of rituals, spirits and ghosts on Nigeria’s seat of power and it’s occupants.

Times without number I chuckled to myself as line after line Abati whom I regard as a trailblazer in the media world perhaps running short on reasons why the Jonathan administration failed decided to use this as a trump card to quieten a number of us who blame Jonathan for failing the nation.

If Abati thought so, then he is largely mistaken as such talk may only expose him further to immense ridicule. I cannot imagine a man like Abati, whose faculties largely impressed me as a student could descend so low and apportion blame of our country’s failings to ghouls and demons!

Abati makes me laugh when he hints at spirits naturally causing fires in the various homes in Aso Rock, wonderful! Just as some persons would scream “ Blood of Jesus!” when they see a cockroach, wall gakor or cat and immediately brand them as witches and wizards or instruments of an attack from the village. I would be sure to inquire what spirit led to a fire in a friend’s apartment or a big government office, where funds have been tampered with! Ah, remember the Nigerian External Telecommunication building that was engulfed with fire in 1983, lets blame it too on the spirits!

Then Abati extends his theories to the third legs of a number of the occupants of Aso Rock, which he said had cease to work in “the other room” forcing their wives to resort to the Love Machine. Haba, this forced me to ask whether Abati had taken a census of all the men in Aso Rock to determine whether their third legs were functional or not? Perhaps he organised SinParties or was invited to these SinParties where all the men became shy of the daughters of eve because they could not “perform” and reorganised these trysts after they lost out in the last elections only to see the spirits release their vigour. I mean such talk remains bizarre and nauseating! But let’s not be offended, just blame it on some spirit!

Abati painted the picture of Aso Rock as a hospital with agonising victims, as well suffering from all kinds of cancers! Ok, I get it only Aso Rock occupants suffer from these cancers, then I guess the issue of people suffering from them in other hospitals were also occupants of Aso Rock! Yeye de smell o!

Even the talk of convoys having accidents, near helicopter crashes or the refusal of air planes to start on a number of occasions was also blamed on spirits by Abati, despite the fact that he had alluded one of the challenges to the miscalculation of the pilot!

Abati alleges that there is also a spirit that made President Jonathan to take wrong decisions! Wonderful! So the decision to loot and steal the country blind under Jonathan was the handiwork of a number of ghouls, he is saying don’t blame Jonathan nor his cabinet for failing to save for the rainy day and the squandermania that occurred under his watch, for they were all victims of such ghouls.

Abati believes that Aso Rock is possessed with demons, inflicting death and pain on the occupants, yet he relentlessly campaigned for his principal and himself to return to power. He says that should he be president that he will that will build a new Aso Rock( waste of funds) and dedicate it to the all-conquering Almighty, he also says that this is a country in need of prayers But come to think of it, was it not the same Jonathan who uncountably visited Jerusalem and church conventions of notable men of God? Was it not the same Jonathan who organised prayer retreats with men of God thundering forth in Aso Rock, how come these prayers did not chase out these ghouls?

When men like Abati begin to reason like this, then it is no wonder how our society remains in the backwaters!