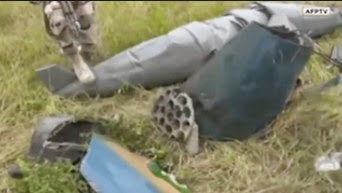 The missing Nigerian Air Force Alpha Fighter Jet (NAF 466) may have been found at the bank of River Benue. The fighter jet, said to have been missing since September 12, was believed to have had two pilots on board before it disappeared.

The plane had reportedly left the Yola Airport at about 10:45am on a routine operational mission to some areas in the state under attacks by members of the Boko Haram sect.

The jet that was expected back by 12 noon same day had been missing since while efforts to trace it had failed. There were reports on Tuesday that the plane had been found in Kwaine area.

It had not been confirmed by the NAF search team as of the time of this report if the remains of the aircraft found near the River Benue belonged to the same missing fighter jet the Air Force.

A resident of Kwaine in Adamawa State, who preferred anonymity, told PUNCH on phone that the remains of the aircraft was discovered by some fishermen at the bank of River Benue and that the fishermen had alerted security agencies on the discovery.

The resident said the entire area had been cordoned by security operatives.

The NAF Alpha Jet (NAF 466) participated in the counter insurgency operation against the Boko Haram before it went off the radar on Friday, September 12.