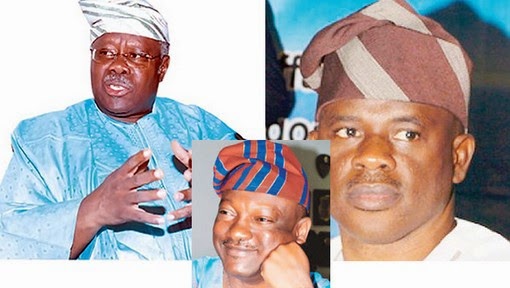 In this piece, Punch’s Eniola Akinkuotu examines the conflict within the Lagos State chapter of the PDP ahead of the 2015 elections.

On June 22, 2014, the day Mr. Ayodele Fayose was declared the winner of the Ekiti State governorship election, it seemed the fortunes of the Peoples Democratic Party in the South-West had changed for the better.

Weeks later – precisely on July 11, 2014 – Fayose arrived at the Gani Fawehinmi Freedom Park, Ojota, along with several leaders of the PDP on a ‘thank you’ tour to Lagos State. Many observers, however, believe that the aim of the event was to create awareness for the PDP and mock the All Progressives Congress, which has been ruling the state since 1999.


At the event, some PDP leaders such as the then Minister of State for Defence, Musiliu Obanikoro; the Chairman, PDP Mobilisation Committee in the South-West, Chief Buruji Kashamu; and six other governorship aspirants in the state; made it clear that their mission was to wrest Lagos State from the APC.

Three months later, however, it seems the PDP’s attempt to ‘sack’ the APC has suffered a setback, following emerging acrimony and infighting between the supporters of Obanikoro and another governorship aspirant, Mr. Jimi Agbaje…

Agbaje, who is alleged to be enjoying the strong support of George and Ogunlewe, was said to have been promised the governorship ticket long before he joined the PDP from the Democratic People’s Alliance, which was deregistered by the Independent National Electoral Commission. Since Obanikoro was still a minister at the time, it was believed that with the support of such influential leaders of the party, Agbaje would be accepted by other aspirants.

However, the political calculation changed when Obanikoro resigned his ministerial appointment and joined the governorship race. Since then, it had been allegations and counter-allegations between the two camps.

A source close to Obanikoro, who preferred to remain anonymous, said, “When Agbaje joined the PDP and declared his intention to run for governor, he was highly favoured by the party leadership and was rumoured to have the President’s backing. They probably believed that Obanikoro would not contest. But now that Obanikoro has declared, it has now dawned on them that things will not go as smoothly as they thought.”

As the crisis deepens, the warring parties which have the Agbaje, Ogunlewe, and George camps on the one hand; and Obanikoro on the other hand, have not had a direct confrontation. They have not traded accusations in the open. However, various groups have sprung up in support of each of the two major factions, issuing press statements on their behalf.

For example, a group, the Lagos Integrity Watch, told Obanikoro to forget his bid for the party’s ticket. The group slammed Obanikoro for allegedly criticising George over the conduct of the ward congress in the state. The coordinator of the group Olarinde Onitolo, in a statement, said, “We read with alarm and disgust the outrageous claim of Senator Musiliu Obanikoro, alleging that our national leader, Chief Olabode George, was somehow partisan in the ward congress held in Lagos State. This is unfair. It is crude, illogical and foul. The fact of the matter is that Obanikoro is a rejected aspirant. The stakes are too high. Obanikoro should apologise immediately to our party and Chief George for this gross indiscretion.”

READ ALSO:   Jennifer Aniston Flashes Her Toned Legs As She Poses In Heels And Underwear

However, another group, which is loyal to Obanikoro, The Patriots, berated George for being a dictator in the party. The group, while adopting Obanikoro as its sole candidate, said it believed that George was planning for the PDP to fail because he wanted to remain the leader of the PDP in Lagos. The group explained that if a PDP governor emerged next year, the governor would assume the leadership of the party and thus make George redundant.

The Organising Secretary of the South-West PDP, Mr. Femi Carenna, who is a staunch supporter of The Patriots, said, “Only Obanikoro can face Tinubu and even Tinubu knows this. Obanikoro is the only person that can take the PDP to Alausa Government House next year. We saw how he performed in Ekiti and even in Osun. We are sure that he is the only one capable of fighting the opposition.”

As the fighting intensified, another pro-George group, asked an Ikeja High Court to stop the governorship ambition of Obanikoro over an alleged falsification of age. Besides, the group asked the court to determine Obanikoro’s citizenship, alleging that the ex-minister had acquired the citizenship of the United States without renouncing his Nigerian citizenship.

However, another group, The Group of Concerned Lagosians, said:
“We are solidly behind Senator Obanikoro and wish to let Bode George and his cohorts know that Obanikoro is a true son of Lagos, who has served Lagos decently all through his public service career without any criminal record, accusation or litigation. He will not be intimidated by half-baked politicians who are already afraid of meeting him at the primary.”

Responding to the crisis within the PDP, a former Minister of State for the Interior, Mr. Ademola Seriki, who was a vice chairman of the PDP in Lagos State, before defecting to the APC, said the disunity in the Lagos PDP was expected and that it would affect the party’s chances next year.

He said, “They have not and cannot win Lagos because they are not united and can never be. They have never had power in Lagos before and don’t know what it is like to have it. So, when power is approaching, all of them will be hungry. It is like putting food in front of people that are not just hungry but starving. You know, when they see the food, they can just start slapping one another because no one would want to be cheated. That is what is happening now.”

Navigating obstacles around progressive portrayal of women in arts

Ferguson cried tears of joy when Scots qualified for Euro 2020