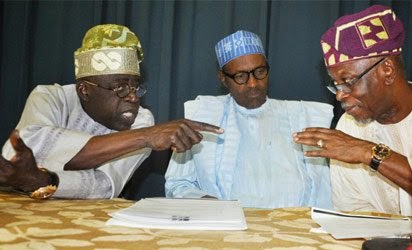 According to Punch report, a gigantic test of wills is rocking the All Progressives Congress just days to the official inauguration of President-elect Mohammadu Buhari as Nigeria’s substantive President.

Impeccable sources within the party said that some ex-governors, Buhari’s associates and mutinous party men from the South-West are trying to whittle down the influence that the national leader of the party, Asiwaju Bola Tinubu, will have on the incoming government in Abuja and across Nigeria.

Tinubu, the party’s undisputed leader, is widely feted as the force behind the

merger of all the parties in the country which led to the emergence of APC as Nigeria’s major party.

On many occasions, Buhari, who defeated Goodluck Jonathan in the March 28 presidential elections, has also acknowledged the efforts of Asiwaju Tinubu, fondly referred to as Jagaban by his admirers.

Some power-brokers within APC, some of whom are trusted by the president-elect, are said to be mounting pressure on him to reassess his ties with the APC national leader. These power-brokers are also said to be questioning Tinubu’s and the South West’s contributions to Buhari’s election victory.

Recently, at a public function, the Oba of Lagos, Rilwanu Akiolu, gave indications of the duo’s strained relationship, even as he asked people to pray that Tinubu’s “labour” would not be wasted.

“All Lagos residents should pray that the labour of Tinubu should not be in vain. A lot of things have been happening now. Some people have been telling Buhari all sorts of things. Awujale (Paramount Ruler of Ijebuland) and I have decided to meet Buhari because Lagos and South West states must benefit from the General Buhari administration,” he said.

Reliable sources within APC however told Punch that the gang up against the party leader started before the party’s victory at the elections.

One of the sources, said hat those opposed to Tinubu within the party first moved against the national leader during the APC’s national convention in June last year.

According to him, some ex-governors and other high-ranking members of the party backed a former governor of Bayelsa State, Timipre Sylva, against Tinubu’s candidate, Chief John Odigie-Oyegun.

The source, an associate of Tinubu, said, “Even before Buhari emerged as the party’s presidential candidate, some people in the party, particularly the governors and some ex-governors, wanted another candidate as chairman. They were totally opposed to Odigie-Oyegun who was Tinubu’s choice. They believed that if they succeeded in getting their man as the chairman, they would have more control of the party, but they failed.”

The source added that the same scenario played out during the party’s presidential primaries. “It is not a secret: initially, the same group of people in the APC were totally opposed to Asiwaju’s choice of Buhari. They wanted either former Vice-President Atiku Abubakar or Governor Rabiu Kwankwaso of Kano State. When you look at it critically, their choice of these candidates then was not based on any fundamental reason but just to oppose Tinubu and gain more ground in the party. It is funny that some of them who now move around with Buhari were totally against his candidature as APC’s flag bearer,” he said.

The source added thus, “We are optimistic that Buhari and Tinubu will manage their relationship well. They will not allow anyone to come between them.”