Husband and wife, please walk away rather than engage in fights that could lead to a mess like this one.

The wife, Mrs. Nwogo Nzedebe was allegedly attacked with pliers by husband, Paul Nonso, after she was said to have “slapped him” and also reported him to the Police for beating her not long after she gave birth to their first child, a baby boy. The matter is really dirty and controversial.

The husband has told his side of the story through a friend on Facebook. Read what he said… 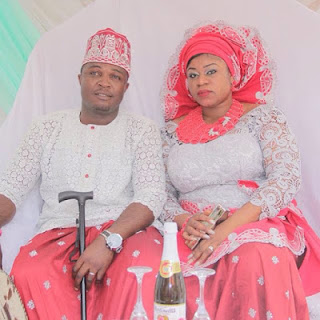 The husband’s friend wrote this on his facebook page:
The girl’s family has a little money, sponsored majority cost of their wedding (Nigerians and big wedding). If you do wedding at your backyard no one will die oh… Anyways, his mother-in-law seized all the money they sprayed them that he did not contribute enough to the wedding, the girl’s family disrespects and abuses him, then the girl slaps her husband..???

Let me state a disclaimer.. before I continue gist..

Any girl in this world that puts just one finger on me, whether you are forming anger.. Hmm, I’m knocking you the phuck out and I do not say this lightly..Everyone keep your hands to your self..

Now back to the gist.. the girl slaps him anytime they have a disagreement, the girl destroyed their materials and furniture when they had an argument. Anyways, from fighting one of these days..he used pliers and screwed out her ear…!

Pathetic story right?? But guess who I blame?? The MAN..
Yup.. Wetin you dey find when a lady abuses you like this.. You know most times we tend to rip the men out for their treachery.. But if the entire picture is presented you can kinda see his anger.. But still though it does not give you a right to disfigure another human being.

Domestic abuse applies to everyone.. Don’t go about disfiguring people or staying in something that hurts. LEAVE OH!!

“If Shatta Wale Rejoins VGMA, I Will Stop Managing Him And Go Into Farming”-Bullgod Says