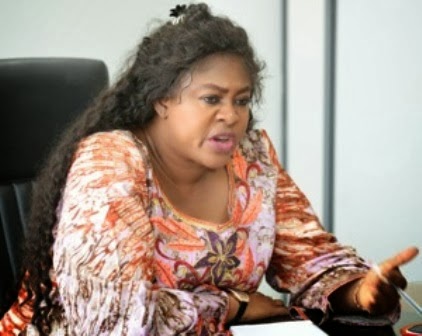 I don’t know if we should describe her as embattled Senator, but Stella Oduah has cried out over what she termed as “misinterpretation” over media reports which quoted a Supreme Court judgment to have sacked her and other federal lawmakers from Anambra State.

Reports in the media said that the apex court had ordered the replacement of Oduah and other lawmakers from the state, saying that their nomination to contest in the 2015 election was illegal.

But in a statement issued by Madam Stella’s Press Secretary, Cynthia Ferdinand,  she said that the report in the media was misleading as the apex court did not order the withdrawal of her certificate of return.

She said that the judgement of the Supreme Court said that it was only the National Executive Council of a political party (in this case PDP) that had the legal right to sponsor candidates in an election.

Oduah, therefore, stressed that she and all the other lawmakers from Anambra state have not been sacked by the Supreme Court, contrary to media reports.

She said: “It is pertinent to note that this is a mere misinterpretation of the Supreme Court rulings and‎ should be disregarded in all entirety‎. The Supreme Court did not order the withdrawal of the Certificates of Return issued by the Commission.

“It did not hold that the faction of the PDP had the right to sponsor candidates for the Peoples Democratic Party (PDP). It did not equally authorise the Commission to substitute our clients with the individuals whose names were on the list improperly allowed by the Commission,

“Series of judgment of the Supreme Court of Nigeria states that it is only the National Executive of the party that has the vires to sponsor candidates.”

– Who do we believe now… Stella Oduah or the supreme court judgment?

I Thought The SUV Is A Blessing – Pastor Nabbed With Stolen Car Confesses
Ladies!! What Your Man Needs Is Not Just S3x – Must Read
Comment