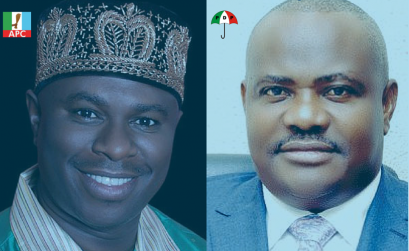 Dakuku Peterside, the candidate of the APC in the 2015 Rivers governorship contest, has revealed that there is emerging evidence that Nyesom Wike and his supporters knew ahead of time that the Supreme Court would rule in the governor’s favour.

He made the shocking revelations at a press conference in PH on Tuesday. Read full details…

Wike had mistakenly said during live telecast church service that: “Let me thank our former governor, Dr. Peter Odili [husband of Supreme Court Justice, Mary Odili]. He will call me midnight to tell me what to do….he will say ‘go so so place.’ I took all his advice, and here we are today.”

The APC candidate said “this shocking confession needs no further explanation except for you and other decent Nigerians to further make your fair conclusions.”

Full text of the press statement:

GENTLEMEN OF THE PRESS,

INTRODUCTION
You will recall that on Wednesday, January 27, 2016 the Nigerian Supreme Court handed down judgment on the Rivers State Governorship matter. In that judgment, the apex court upheld the appeal by Gov. Nyesom Wike against the earlier decisions by the Rivers State Governorship Election Petition Tribunal and the Appeal Court which concurrently annulled Nyesom Wike’s election as governor.

NYESOM WIKE’S UNBECOMING THREAT TO INEC, OTHERS
Consequent upon the judgment by the Supreme Court, I, the APC Governorship Candidate, Dr. Dakuku Adol Peterside, despite receiving the judgment with mixed feelings, came out to publicly announce my unreserved acceptance of the verdict. However, a few days later, the Governor, while addressing Civil Servants in Port Harcourt exhibited unconscionable indiscretion of the highest order by re-echoing his earlier incendiary statements threatening INEC personnel with death over the forthcoming National and State Assemblies rerun elections. He said, “Anyone who plans to rig an election is an armed robber and should be treated as such. If you are coming to rig an election in the state, first prepare your will before embarking on the journey. Inform your wife or husband and go ahead to say your last prayer.”

The above statement by Gov. Nyesom Wike confirms his earlier threat last December while commenting on the rerun elections in Rivers State. Then he had stated, “We are not afraid of any re-run at all. But we have always said if they said there should be a re-run, let it be a re-run and not to write the result. Let them bring anybody as INEC official from anywhere that wants to be funny, I wish the person must have written his Will before he comes.”

This is the most callous statement anyone can make, much more a state governor. It is a known fact that Wike promotes violence and believes so much in jungle justice but he forgets that such outlook does not have any place in a civilized society. 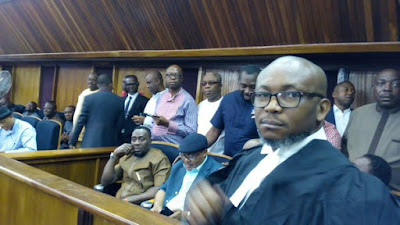 Despite my acceptance and temperate public comments on the verdict of the Supreme Court on the 27th of January, 2016 Gov. Nyesom Wike, by his unguarded utterance last Sunday, seems to give credence to the pervading doubt being expressed on the judgment in public space especially in the media. Many a Nigerian continues to wonder why PDP and Gov. Wike’s supporters went on wild celebration across Rivers State as early as 9am on the day of judgment even if the actual verdict was handed down at about 6:20pm of that day. It clearly suggests that they might have been in the know of what the judgment would be long before the Supreme Court pronounced it. This is coupled with several comments especially on the social media some 3 weeks earlier such as “Thank God there will now be no need for a rerun election….. It is surely ending at the Supreme Court,” etc. etc.

Credible information confirmed that Nyesom Wike had earlier confessed to some persons of having met one of the Justices of the Supreme Court in Mbaise during an important burial, another at Owerri in a hotel and yet others in Dubai and Saudi Arabia respectively. These Justices were in the panel that decided the matter in Wike’s favour.

However, the most striking revelation by Nyesom Wike is contained in his account at the thanksgiving service last Sunday. He obviously stunned his audience and the watching world when he confessed that when it came to the Judges, Dr. Peter Odili and the wife Justice Mary Odili [a Justice of the Supreme Court] were his advisers. This simply confirmed his earlier statements that he had contact with the Justices after several attempts to reach the Chief Justice of the country failed. It is therefore obvious that the decision of the Supreme Court on the Rivers State Election was not a product of justice but rather a product of compromise and orchestrated contrivance to legalise electoral violence and rigging and, in turn, reward injustice. This calls for serious introspection by our Judiciary and judicial officers.

For the records, in his speech at the church service, Gov. Nyesom Wike probably forgot that he was on live telecast when he stated: “Let me thank our former governor, Dr. Peter Odili [husband of Supreme Court Justice, Mary Odili]. He will call me midnight to tell me what to do….he will say ‘go so so place.’ I took all his advice, and here we are today.” This shocking confession needs no further explanation except for you and other decent Nigerians to further make your fair conclusions.

THREAT OF BLOOD FLOWING WERE THERE TO BE A GUBER RERUN ELECTION
Still speaking at the thanksgiving service, Nyesom Wike said that he would not have given up if the verdict did not end in his favour. He said that through the ruling, the apex court helped in preventing bloodshed in Rivers State.

Hear him: “Blood would have flowed if the election was going to hold again….So, I called some people including the Chairman of PDP, Uche Secondus, that I was not going to run again. They said why and I explained that if I did, many people would die.”

WIKE MUST STOP INSULTING MR PRESIDENT AND DENIGRATING THE MILITARY
Continuing on his verbal incontinence at the church service, Nyesom Wike lampooned President Muhammadu Buhari and the Nigerian military. He dared President Buhari thus: “If you like bring your Boko Haram soldiers to Rivers State, I will enter INEC office on election day [National and State Assembly rerun elections), let me see who will push me out.”

This kind of statement typifies the persona of Gov. Nyesom Wike as someone lacking in respect, patriotism and character of being a councillor much more a state governor in the Federal Republic of Nigeria.

Let me draw the attention of Nyesom Wike to the fact that it is most callous of him to demonstrate such level of denigration on the gallant officers and men of the Nigerian military who are putting their lives at risk every other day to safeguard the Nigeria state and citizens when he referred to them as Boko Haram soldiers. I vehemently condemn such display of verbal indiscretion against Mr. President and the Nigerian military.

It is noteworthy that Gov. Nyesom Wike has vowed to fight corruption his own way than support the anti-graft campaign of the Buhari administration. According to Wike: “We would not support the fight against corruption; we would not take anybody to the EFCC because I know what would happen.”

Gentlemen of the press, I decided to bring these unfolding events to the attention of Rivers people, Nigerians and the world through you so that the grim situation starring us in the face in Rivers State under the administration of Chief Nyesom Wike can be better be understood by all. I thank you for your attention.