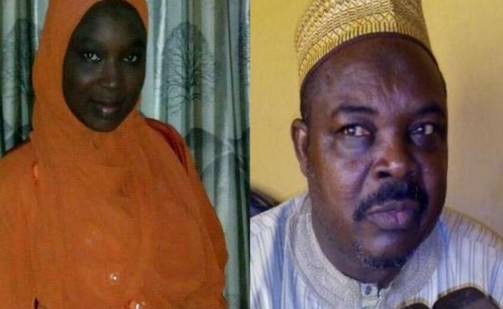 We are having a growing number of lazy men these days, whose agenda is to enjoy life without work. But the major concern here is the “craze” that is causing wife to kill husband and husband to kill wife.

Please, marriage is not something you get into without prayer. No matter how much you think you love your partner, prayer will help reveal a lot that your ‘blind heart’ won’t be able to decipher.

Details of the sad story: Fatima Ibrahim had closed from her place of work, Zubairu Pilot Primary school in Dutsinma town where she teaches Basic Science.

Passing through her family home, where she exchanged pleasantries with relatives, she retired home at her residence at the Low-Cost Housing Estate. Little did family and friends know that they were saying final farewell to her, as her lifeless body was discovered the next day in bed, with blood trickling from her mouth, and bruises on one side of her face.

The deceased, a 32-year-old mother, was married to Umar Manu, a staff of the Federal University
Dutsinma, who hails from Zaria, Kaduna, and prime suspect in the case. They have a three-year-old son.

According to Daily Trust, trouble started for late Fatima when her father, Alhaji Ibrahim Habibu, died in 2014 (December) and she inherited his wealth. He was a regional manager with a major bank in Sokoto.

According to Fatima’s uncle and spokesman of the family, Babangida Habibu, since the man’s death, Manu went all-out to get his wife’s share of the inheritance divided among late Alhaji Habibu’s children.

He said: “On our part as family, we resolved to do all possible to protect his property, and committee was set up to share the inheritance appropriately, making sure accounts were opened for each and every one, with each share of money lodged within.”

Late Fatima’s uncle said about seven months back, his niece reported her husband’s changing attitude and the family had to intervene, and invited him along with his parents to iron things out. But, Habibu said, after a while she complained again.

“It was at this point that she chose to move out to a new place, where he still visits on the pretence of wanting to see his son,” he said.

Habibu said: “Manu had earlier been threatening Fatima for a while, and even on that fateful day he called to ask her to make available N800,000 for him to settle some debts. Mark you, she had always tried to let him know that the money he assumes she had was not in her custody, but he never wanted to hear that.”

Manu, according to Habibu, visited the deceased at her residence on the day the murder was perpetrated, at about 8:30pm, entering in and out of the compound twice before he finally left after 11:00pm.

“But the next day, Fatima’s maid met her lifeless body on the bed and raised alarm,” he said.

The elder man said Mr. Manu was apprehended and handed over to the police where he has owned up, and confessed to the killing, even narrating how he did it.

According to late Fatima’s uncle, her family have said all they want now is for the law to take its course.

State Commissioner of Police, Abdullahi Usman, who confirmed the arrest of the greedy husband, Manu, said investigation has opened up on the matter.