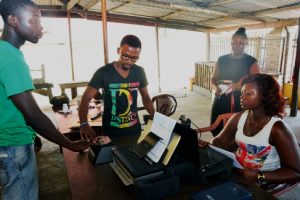 These developments include, but are not limited, to the following:

The CODEO observer reported that cutlasses, stones, cudgels and other offensive weapons were brandished, wounding one person, who was eventually taken to the hospital. The incident started with verbal exchanges between the District Chief Executive for the area (who happened to be at the center) and the NPP agents posted the same center over the age of a registration applicant.

For instance, at the Accra Girls Secondary School

Registration Center in the Mamobi East Electoral Area in Ayawaso in the Greater Accra region
today, Thursday May 5, CODEO observers spotted NDC-branded vehicles loaded with people
who appeared to be serving as guarantors for would-be registrants.. At the R/C 2 Hwidiem
Osuodumgya A JHS Registration Centre in the Santeagya Electoral Area in the Asutifi South
District of the Brong Ahafo Region, unauthorized persons had gathered around the registration centre ostensibly to vouch for applicants.

CODEO observers also reported instances where Registration Officials allowed people to endorse guarantor forms early in the morning and depart from the center, even before registration had commenced. These forms were subsequently used to support the registration of applicants.

This situation was observed, for example, at the T. B. Awakorme Registration Center in the Avoeme West Electoral Area in the Ketu South District of the Volta Region.

READ ALSO:   Nigeria Has Made A Car From Wood And Will Be Rubbing It In Ghana’s Face Anytime Soon

CODEO observers reported the inadequacy of registration centers in some densely populated
areas, thereby hampering the ability of some potentially eligible persons to register. At the Legon Coalition of Domestic Election Observers (CODEO)

STATEMENT ON THE VOTER REGISTER

Hall Registration Center in the Legon Electoral Area in Ayawaso in the Greater Accra region for example, CODEO observers reported long queues of hundreds of people waiting to register. With the registration team capturing an average of about 100 persons a day, the Coalition is afraid that the EC may deprive some otherwise eligible persons from registering before the end of the exercise.

Misunderstanding of the Challenge Procedure

CODEO observers also reported of instances of party agents and party activists engaging in verbal exchanges and violent confrontation over the eligibility of registrants, even after a challenge form has been filled in respect of the registrants.

At the R/C Primary School Registration Center in Banda Ahenkro in the Banda District of the Brong Ahafo Region, for instance, NPP party agents’ challenge against some 3 registrants provoked a violent confrontation with suspected NDC activists in the vicinity. The police was however able to intervene and restore calm at the registration center.

 CODEO reiterates its call on political parties, particularly the NDC and the NPP, to
restrain their respective agents and activists from engaging in disruptive and violent
behaviour at registration centers.

 CODEO calls on the EC and its monitoring teams to pay close attention to the conduct of
registration officials posted at the various centers.

 CODEO implores the EC to increase the supply of registration centres in denselypopulated
areas of the country to give all eligible citizens the opportunity to register to
vote in the 2016 polls.

 Finally, CODEO urges the security agencies to apply the law rigorously in dealing with
anyone who engage in registration-related criminal offence.
CODEO’s observation of the registration exercise is made possible with