The report said the seven-year-old boy, also called Michel, is the sole owner of two large commercial offices in a fancy neighborhood in Sao Paulo, and that Temer’s business office is located at one of the sites. 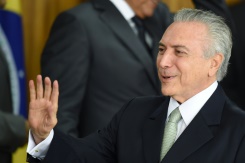 The properties were transferred to junior Michel as his anticipated inheritance, and the interim president’s older daughters, all adults now, also received some real estate in the same manner, Temer’s spokesperson said.

However, when Temer ran as President Dilma Rousseff’s vice president in 2014, he declared to the Federal Revenues Secretariat that the properties were only worth 190,000 reais (53,200 U.S. dollars).

According to the daily, politicians often declare their properties’ value at the time they were bought, as the law does not require them to update the value, which makes politicians appear less wealthy than they actually are.

Covid-19 deaths are going up — WHO warns, as world records most cases ever in a single week