The Black Stars will hold two training sessions today before they travel to Port Louis on Wednesday for the return leg, after beating Mauritius by 7:1 at the Accra Sports Stadium in the first leg of the ACFON 2017. 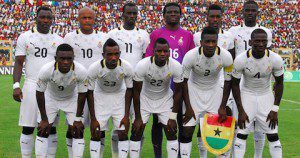 Ghana is leading Group H with 10 points with Mauritius third with 6 points from 4 games, a draw for Ghana will seal their place at next year’s AFCON in Gabon.

READ ALSO:   Yeap, Nigeria has a SWAT team too

The rest of the stars players expected to join up with the 18 are Goalkeeper Razak Braimah, Daniel Amartey, Alfred Duncan, Edwin Gyimah and Thomas Partey.

Letter To My Ex
Fastest Human: GNPC, Adidas in as Sponsors for Ghana’s 4 Best Athletes
Comment