The Ho Central Constituency of the National Democratic Congress (NDC) has launched its campaign for the November polls with a promise to deliver more than 80,000 votes to President John Dramani Mahama. 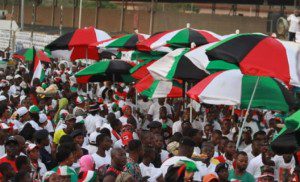 “The election is one touch and our target is minimum, 80,000 votes,” Mr Benjamin Kpodo, Member of Parliament for Ho said at the launch, preceded by a two-hour health walk.

He said President Mahama delivered on promises he made to the Constituency and urged the people to retain him and the Party in government.

Mr Kpodo said he had also justified his “inclusion” in President Mahama’s winning team and must also be retained in Parliament with “all the votes”.

Madam Fafa Adinyira, Ho Municipal Chief Executive said the town is satisfied with development projects by the government and confident the people would show appreciation on November 7.

Madam Helen Adjoa Ntoso, Volta Regional Minister said in view of development projects in the Constituency, the target is achievable and charged the Party to remain focused.

“A lot is happening so we can achieve the target. We just have to be focused because Ghana is not ready to try any new President,” she said.

Mr Koku Anyidoho, NDC Deputy General Secretary said “though some things are not well”, Ho is better than it was under the New Patriotic Party and asked the people to vote for the NDC.

About 96,000 people are on the electoral roll in the Constituency for this year’s elections.