Tinubu will be presented with the award in a lavish ceremony during the Global Village Extra Seminar and Awards night slated for October 28-30, 2016, in the United States. 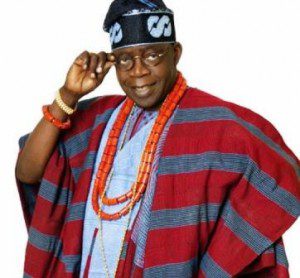 The organizers of the three-day event had informed earlier that the Champion of Democracy award category intended for the main actors at the last general elections in Nigeria, will be contended for by the three people listed, because they played significant roles in determining the winner of the 2015 presidential election in Nigeria.

The former Lagos State governor, respected all over the world for his strategic prowess and political know-how, according to the organizers, won the award because of his ability to sell President Muhammadu Buhari to the south westerners.

Based on his experience as a former Governor, he was able to merge forces from the Action Congress of Nigeria (ACN) with the All Nigerian Peoples Party (ANPP), Congress for Progressive Change (CPC) and a section of All Progressive Grand Alliance (APGA).

Though, initially it looked very impossible, while the major opposition party, Peoples Democratic Party (PDP) made fun of their efforts, All Progressives Congress (APC) eventually became a reality.

The drama which unfolded during the first national congress of the party and brought in its national leadership never deter the great politician from pursuing his goal, even when some bigwigs in the party decided to leave.

READ ALSO:   Drill Ship Saga: Nobody Should be Labelled A Thief – Kwesi Pratt

Not only did he sell the former aspirant, he also re-branded the former military ruler and made him acceptable all over the country.

During the outcry over Muslim-Muslim candidate, which the opposition also used to almost cripple the new party, the party’s national leader went in search for a suitable candidate from the lineage of Awolowo – a respected nationalist in the country and produced Prof. Yemi Osinbajo.

At last, he broke the 16 years jinx, produced best Vice Presidential candidate and right there, the APC won. Obviously, with all these strides, many believe he almost single-handedly won the election for the APC.

Amaechi on the other hand was nominated because he started the onslaught with his move away from the Peoples Democratic Party (PDP) with five other governors, and also played a very prominent role in the All Progressives Congress, APC’s campaign during the period under review.

Ex-president Goodluck Jonathan, was nominated for conceding defeat to the incumbent, an act said to be the first in Nigeria and the entire Africa, which has fetched him numerous international awards and recognition around the world.

“Tinubu was picked because of his steadiness and leadership attributes from over the years” said a member of the awards committee.

Asiwaju Bola Ahmed Tinubu was born on 29 March 1952, in Lagos, Nigeria to the Tinubu Family of Lagos state.

According to reports, he attended Richard Daley College, Chicago Illinois, where he earned himself a place in the honors list. He then proceeded to the Chicago State University, Illinois where he obtained a Bachelor’s degree in Business Administration (Accounting and Management).

After graduating, Asiwaju started his professional career with America-based Arthur Anderson, Deloitte Haskins and Sells, and GTE Service Corporation, also know as Deloitte Haskins and Touche, which is the largest Communication and Utility Company in the United States of America then.

On his return to Nigeria, Asiwaju Bola Ahmed joined Mobil Producing Nigeria as a Senior Auditor before he retired as the company’s Treasurer.

His political career started when he was elected Senator for the Lagos West constituency in Lagos State, Nigeria in 1993, and has governor of Lagos State between 1999 – 2007.

Emmanuel Aziken, in an article titled: Asiwaju Bola Tinubu: The Strategist As Game Changer, published in the Vanguard 20 April, 2016, described Asiwaju Tinubu as the pathfinder, and the ultimate game changer of Nigerian politics

His words: “Tinubu’s emergence on the national platform was not without much stress. It took a lot of political prowess and patience for the former Lagos State governor to survive intrigues weaved against him by successive administrations controlled by the Peoples Democratic Party, PDP in Abuja.

“In the 2003 elections, he was the only one of the five governors elected on the platform of the Alliance for Democracy, who survived the political tsunami contrived in an ethnically inspired conspiracy supposedly framed to help return President Olusegun Obasanjo to power.

“While all the other Yoruba AD governors lost to the PDP, Tinubu through sheer guts and political wizardry sufficiently checked the PDP marauders. The last man standing in 2003 then became the bastion of the progressive bloc. In his second term as governor between 2003 and 2007, Tinubu was faced with the double task of not just wading off the sustained political darts of the PDP from home and Abuja, but also ensuring that Lagos did not slip away from his political fold into the hands of the PDP in 2007.

“Remarkably against many intrigues including the withholding of local government funds by Abuja, he succeeded with great aplomb in ensuring that Lagos remained within the pace and pattern of progressivism. Indeed, the 2007 transition was challenging especially as he sought to project a successor that would actualise his visions of Lagos.”