Are Ghanaian women truly capable or genuinely competent enough to be appointed to high office, or can they only reach such lofty and lordly heights through offering sexual favours? Are our women celebrated for their natural giftedness and hard work, or are they climbing and clambering up the ladder based on their alluring curves and irresistible charms? 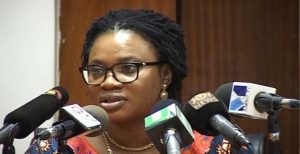 In a crude quote attributed to Mr. Agyapong by Kumasi-based Ultimate FM, he said highly placed sources in government told Madam Osei to, “[B]ring your buttocks in exchange of EC Chair position.” The MP said this while addressing supporters of the opposition New Patriotic Party at Asokwa, a suburb of Kumasi.

The Tyranny of Suspicion

It is of significant worry that suspicion pervades and rules in our society. Sadly, the true merits of women have never been duly acknowledged and celebrated in many spheres of our national fibre. In truth, suspicion targeted at women appointed or promoted to high office remains endemic in our society. These women are prima facie perceived to have offered sexual favours to reach where they are, instead of rising based on merit and competence.

It is laudable to note that right here in Ghana, women are increasingly participating in the national development process and working hard to climb the social ladder. In so doing, they are making the nation proud by their outstanding performances in different sectors like medical science, banking, education, engineering, politics, business etc. Through firm determination, sheer force of will, genuine competence, and unstinting effort, Ghanaian women are shattering the oppressive mould and achieving impressive feats and reaching positive milestones.

READ ALSO:   My Life Got Better When I Met My Wife – Actor IK Ogbonna

Nevertheless, the tyranny of suspicion cruelly and stubbornly refuses to lose its grip on certain parts of our society. This minority, if we may say so, belittle feminine ability and womanly sagacity and believe women in this day and age cannot rise to the zenith of their chosen professions unless they satisfy the prurient fantasies of some lecherous rakes.

In all truth, folly is not confined to a small section of our society—it pervades all! Take our institutions of higher learning, for example. When women graduate with high grades or first class honours; is there a general consensus on their impressive abilities? Indeed, even here, there are those who believe it is not based on pure merit but attributable to an exchange of sexual favours.

Now, we are not naive to ignore known and proven truth that there are some young ladies, who fancying academic success and excellence are still not motivated to earn so by fair means. Indeed, they are not interested in the acts of lucubration to stay up at night and burn the midnight candle. While such souls may perhaps be tarnishing the image of the many hard working women, it does not permit society to paint all women with the same brush.

Even when women, based on competence, ace job interviews, far outperforming their male colleagues and landing gainful employment, they are accused of having sold their bodies for their appointment letters. The same suggestion is made of women who rise on the job. For some, their promotion is construed to be based on one and the same thing: an ongoing romantic rendezvous with the creepy boss.

On occasion, folly must answer to wisdom and wonder why it sticks to its circumscribed view that women who drive luxury cars on our roads and have built beautiful houses must have done so, not through their sweat, but through shedding their sense of shame and satisfying the expansive pleasures of some rich man somewhere.

With humankind being creatures of habit, sadly, some crazy habits and thinking remains hard to expunge from the societal psyche. Else, with the noteworthy efforts being undertaken to advance gender equality and empower women in the workplace, marketplace, and the community in general with skills and confidence to be able to live a life of self-worth, respect and dignity; such efforts would have made greater strides and chalked greater successes. Nonetheless, we are still having to deal with some of these issues that refuse to lose their grip on our society.

However much the prognosis remains grim, we will continue to appeal to our bubbling sense of practical optimism and believe that a new day would soon dawn. Suspicion cannot always have its way, in the same manner that night would not always reign. It would soon strike five!

As a people, it is about time we came to the realisation that women are equally competent Homo sapiens. They are created by the Creator with inalienable rights, the same way men are. Like men, they are equally qualified to hold positions of leadership and must be judged based on their credentials and not concluded to have stepped into the higher echelons of society through the back door of trading sex.

Women are as talented as men are, and have the mental capacity to undertake higher education, obtain first class honours and further qualifications, ace job interviews, obtain gainful employment, and receive their deserved promotion on the job.

To hasten the arrival of this new day, our society must learn to celebrate and reward women achievers and not wrongly label or deride them. We must refrain from passing comments which seem to suggest it is only their delicate bodies and the fine pleasures and sexual gratification it offers that are the source of their success.

The vast number of successful women have worked hard to arrive where they are, and as many would admit, they were not handed any favours, but had to dig in deep to carve their own path to success. These women must be lauded and applauded to encourage younger women to take their own future into their hands and work hard to also achieve success.

In all honesty, society as a human institution will not change overnight, and no matter how hard we strive for change, there are some who will seek to drag us back aided by others who will give them ample evidence to do so, and yet, there comes a time when such suspicion aimed at women for lacking genuine competence but exchanging sexual favours for what they receive, have, and enjoy would never be a topic for national debate.

On that day, women would be judged solely for their ability, and treated with the respect they deserve. We cannot wait for such a beautiful day to break through the crack of daunting doom. It would be a day of joyous celebrations for Ghana’s feminine species and their true representation and role as able and competent nation-builders.