I don’t how true this is, sources drew my attention to this morning so I will just share it as I got it…
Chinyere Roseline Chukuma, the widow of popular broadcaster/radio presenter, Charles Bruce Chukuma (Chaz B) who died November 22, 2014 from kidney-related ailment is dating again!
The late radio presenter, who anchored the programme, ‘Sharing Life Issues With Chaz B’
on Inspiration FM before his death, was reported to have had a history of health problems related to kidney failure but reportedly had a successful kidney transplant in 2012 after receiving a kidney donation from his wife, fondly called Chichi.
The same Chichi was in the news in October 2015 when she asked the Medical and Dental Council of Nigeria (MDCN) to investigate doctors in the employ of the hospital where her husband died.
But Chichi seems to have moved on. She has found love again. It was exclusively gathered that the widow, who is in her 40s, is allegedly having a sizzling romance with award-winning Nollywood actor, Daniel Kanayo Daniel. They have been sighted together for a while.
Daniel, who won the AMVCA 2016 Best Actor in a Drama, is said to be head over heels in love with Chichi. Though younger than Chaz B’s widow, (he is 30 years) the affair is known to their friends.
Sources said the lovey-dovey couple travelled together to Ghana during the 2016 Valentine’s Day with Chaz B and Chichi’s only daughter, Monalisa. However, Chichi’s dream of re-marrying another celebrity hit the rocks. First, the young actor’s mother didn’t approve of the relationship. Moreover, Chichi’s brother is up in arms against DKD.
After their Ghana trip, the angry brother was said to have confronted Daniel, who was sleeping in his sister’s house in Lekki, Lagos. He threatened beating him up if he ever came to the house again. 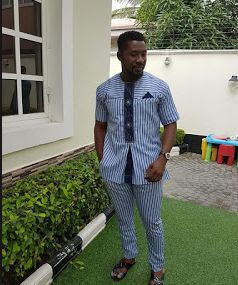 Recently, Daniel posted a picture on his Facebook fans page and his fans commended it. But one of them talked about the toys at the background as Monalisa’s saying, ‘I can see Monalisa at the background’.
Looks like Daniel still goes to Chaz B’s widow’s house despite the threats issued by her brother. However, family sources said that Chichi has not been on good terms with the family since her husband’s death. Though they commended her kind gesture of donating one of her kidneys to late Chaz B, they are angry that she didn’t deem it fit to share the late broadcaster’s money with his other five children who were born to him by two other women.
‘There was a time a Telecoms company sponsoring Chaz B’s programme paid millions of money to her account. Though she shared it to other children, it was what she felt they deserved that she gave them. Even Chaz B’s mother is angry. Chichi has been enjoying everything alone and left other kids in the cold. Though they are abroad and doing well, that is not enough reason to shut them out of their father’s estate’, the source said
Will Chichi marry actor Daniel K. Daniel who is 14 years her junior? Time will tell.
Source: Kemi Ashefon
I don’t think Daniel K. Daniel should be caught in things like this, unless he’s desperate. That’s my own.
READ ALSO:   Niger adds 47 COVID-19 cases