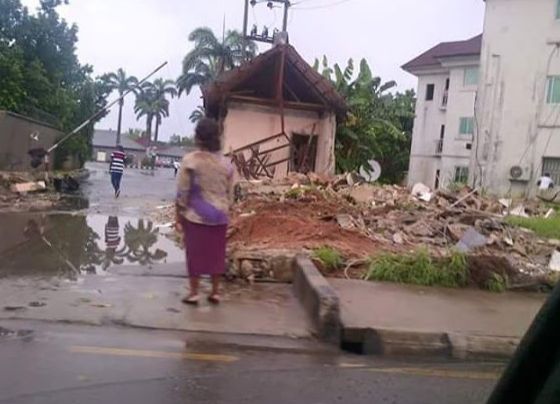 Leaders should only have the moral right to ask citizens to make sacrifices when they have done same.

According to a citizen, Ohalete Wisdom Mayor who shared the photo on FB, Governor Rochas Okorocha of Imo State had to demolish part of his own hotel’s fence in the process of trying to restore sanity to the state’s urban renewal drive.

The source wrote:
“This Is Governor Okorocha’s Property (Lamonde Guest House) Situated Along Orlu Road. The Fence and Gate House were Demolished yesterday afternoon as against Owelle’s critics thinking that the Governor’s property along that road will not be touched.

With what is going on now where Wailers see nothing good in noble ideas and with the current mental state of the Wailers, I can see the ship of the Imo State Wailers Association hovering over the political Bermuda Triangle. And if we don’t take urgent steps to meander the interstices of an eschewable cataracts from the eyes of these Chronic Wailers, then their political calamitous end is imminent in a pestilential aqua.”

Ghanaians must learn; do away with stupid ideas – KB Asante
Stop dirty tribal politics against Bawumia – NPP to Mahama
Comment