The demonstration organised on Monday and attended by supporters of the New Patriotic Party (NPP), Convention Peoples Party (CPP) and the All Peoples Congress (APC), was without any security protection due to a disagreement between organizers and the police. 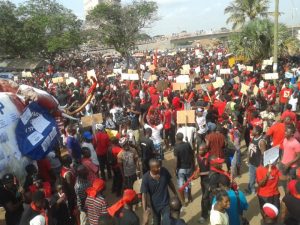 demonstrationIt started at about 0800hrs from the Legion Square and proceeded through the various principal streets of the Tamale metropolis with many of them carrying placards some of which read: “Enough is enough”, “Killer tariffs”, “Reduce electricity tariffs now”, “We don’t eat green book” “Wahala school fees”.

The demonstrators called for a drastic reduction to electricity tariffs for residents of the northern parts of the country and also expressed disappointment over what they claimed was the worsening socio-economic situation in the country.

He said the claim by the National Democratic Congress (NDC) that it has created jobs for the people of the region through various acquisitions including bicycles was untrue.

Mr Awuku urged Ghanaians to teach politicians a lesson by voting out those who fail to deliver on their campaign promises saying, “Nana Akufo Addo is your best choice for 2016 polls”.

Mr Anthony Karbo, NPP Parliamentary Candidate for Lawra Constituency, said the NDC has put the country into serious economic difficulties because of corruption.

He appealed to Ghanaians to vote massively for the NPP to ensure that the wisdom and maturity of its candidate would solve the nation’s problems.

He said “those who doubt the performance of Nana Akufo Addo because of his age must rethink about the aged Presidents who are salvaging countries such as Nigeria, Ivory Coast, South Africa and other economies in the world”.

Mr Karbo said if nothing was done about their demands within two weeks, they were going to organise a series of demonstrations across the country.

Mr Nuhu Jingli, CPP Northern Regional Secretary, expressed disappointment over the current administration of the country saying government has totally failed the people of Ghana and must be shown the exit.

Fighting childhood cancer in the face of limited resources

Oral Ofori speaks at Blogger Week 2016 in the USA
Oh! Obinim was rather arrested for a GHC11.6 million fraud?
Comment