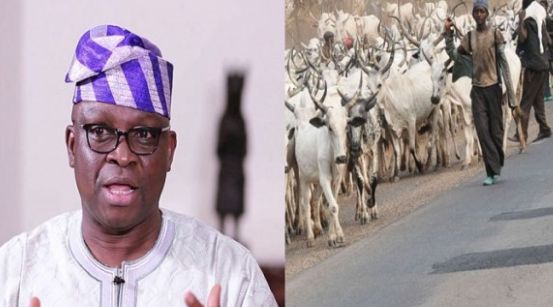 The pan-Yoruba socio-cultural organisation Afenifere; Igbo socio-political groups Ohanaeze Ndigbo and MASSOB, have expressed support for the bill assented to by the Ekiti State Governor, Ayodele Fayose, which categorises grazing with arms in the state as terrorism.

But the umbrella body for northern groups, the Arewa Consultative Forum, however, said any law which contravened the constitution of the country would be illegal, adding that any Nigerian was free to move in any part of the country.

Fayose had, while signing the ‘prohibition of cattle and other Ruminants Grazing in Ekiti 2016’ into law on Monday, said any herdsman, caught with any form of weapons while grazing his cattle in any part of the state, would be arrested and charged with terrorism.

ACF, which spoke through its National Publicity Secretary, Alhaji Muhammad Ibrahim, on Tuesday, said any law passed by Ekiti State, which contradicted the law of the Federal Government should be considered null and void.

“The Constitution of the Federal Republic of Nigeria guarantees free movement of Nigerians as long as they pursue their legitimate business,” Ibrahim added.

The ACF, however, described any individual or group that illegally carried arms against the state as a criminal.

The Yoruba and Igbo groups support the bill, Arewa group believes it’s contrary to the constitution

But the President, Civil Liberties Organisation, Igho Akeregha, said the grazing law in Ekiti State was a two edged sword.

He said, “Herdsmen have a right to freedom of movement with their cattle anywhere in Nigeria but while enjoying that right; they cannot be killing people anywhere they go, which is a violation of the right to life.

“Since the Governor is the Chief Security Officer of the state and has a corresponding duty to secure lives and property, the anti-grazing bill signed by Governor Ayodele Fayose is therefore in order.”