A Sunderland couple who met whilst playing dwarfs in a Snow White shoot have married in a fairy-tale wedding, with their miracle son as page boy.
The wife, Laura Whitfield, who is just 4ft 2, proposed to her 3ft 11 hubby, Nathan Phillips, a month before the birth of their son – the only ‘double dwarf’ in Britain.

However two-and-a-half years later, the healthy toddler acted as a ring bearer at his parent’s wedding.

Laura, 26, and Nathan, 37, from Sunderland, met when they were both performing as dwarfs in a production of Snow White. 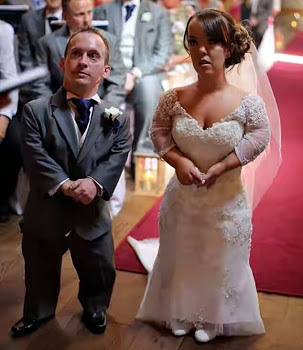 They got hitched in the lavish South Causey Inn, before family and friends. Happy married life!
READ ALSO:   Deceased Australian Woman’s body like to remain on Mt Qomolangma for life