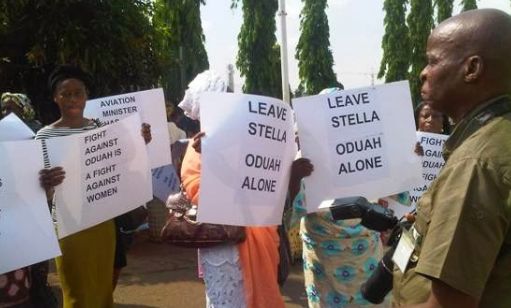 One of the few countries where corruption has supporters in this world is Nigeria. Kidnappers also have supporters. And guess what?? Their supporters are also their victims.

Those supporters will tell you…. “Nooo!! it’s not as if we support them ooh, but we don’t support the manner at which they were arrested. Fat lie.

Has EFCC even invited Patience Jonathan? Doesn’t she have supporters already holding placards for her like football fans?

Even if EFCC use Lincoln Limousine to arrest suspects, there will always be people holding all kinds of placards with shameful inscription in support of them.

And guess who those people are ? The same people they have defrauded… their victims. How sad!