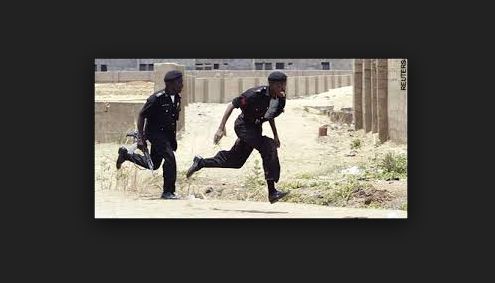 The Lagos Police Command has arrested two members of a robbery gang for allegedly attacking a polythene producing company in Alibaba, in the Isashi area of the state, stealing a raw material evaluated at N6.4million.

The suspects are 42-year-old Moruf Afolabi and one Saheed Adeoti, a new worker of the company.

A policeman, identified as Tunde, aka Agbo, reportedly escorted a truck containing 220 bags of the stolen raw material to the Mangoro area of the state, where they were sold.

According to The Punch, the suspects were arrested sometime in September 2016, three weeks after they attacked the company, Alphabet Packaging Nigeria Limited.

It was learnt that the gang members had gone to the company around 7am on Sunday, August 14, and told a security guard at the gate that they were directed by the manager to collect the raw material.

The guard insisted that they called the manager on the phone so he could confirm the directive. When the robbers realised their ploy would not work, they reportedly resorted to force.

“One of the suspects pretended that he wanted to use the toilet on the premises. The guard allowed him in and the rest of them forcefully gained access into the company. They tied the guard with a rope, sealed his mouth and put him in a room while they looted the store where the raw material was. They stole 220 bags and packed them in a truck.

“The case was reported at the Isashi Police Division and was later transferred to the Special Anti-Robbery Squad of the state command in Ikeja. The information we gathered showed that one Tunde, whom one of the suspects identified as a policeman, escorted the truck to where the chemical was sold. But investigation revealed that the said policeman was not aware it was stolen,” a source said.

Afolabi, who hails from Abeokuta, Ogun State, told the police that he was invited for the operation by Adeoti, adding that he knew Tunde as a policeman in the Aboru area of the state.

He said, “Saheed (Adeoti) and I had earlier worked together at a nylon making company. I know Tunde at Aboru. He is a policeman and I have seen him in police uniform. On that day, Saheed called me on the phone and said I should meet him at Joju bus stop, Sango Ota. When I got there, he told me to follow him to steal Idorama nylon chemical, and I did.”

Adeoti, 25, a native of Ayetoro, Ogun State, said they sold the chemical to a businessman who had a shop at the Mangoro area of Lagos, adding that he got N1.2m from the proceeds.

“We took the stolen chemical to Mangoro and sold each bag for N24,000 to a man called Ibeh. He knew we stole the chemical. Maruf and I got N1.2m each and we gave the driver that drove the truck N40,000. This is my first time of doing this kind of business,” he said.

A police prosecutor, Inspector Benedict Aigbokhan, arraigned the duo before an Ikeja Magistrate’s Court on Friday on two counts of armed robbery.

The presiding magistrate, O. Olanipekun, did not take the plea of the defendants but ordered that the case file be forwarded to the Directorate of the Public Prosecutions for advice.

Your threats to Media unnecessary – Ben Ephson to Judicial Service

Supreme Court Media Order: No institution can force to be respected – Sulemana Braimah