The Electoral Commission (EC) appears to be in quandary, 30 days to the December 7 elections as it has been slapped with a fresh suit occasioned by the disqualification of some presidential aspirants. 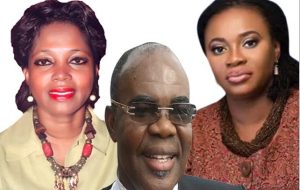 A businessman, who wanted to contest for president as independent candidate on December 7 but was disqualified together with his running mate, has filed a suit against the commission.

Alfred Kwame Asiedu Walker and Nana Esi Koree, popularly known as Lady Tamara (the running mate), whose writ is also citing the EC chairperson Charlotte Osei as a Defendant, want the court to re-instate the candidate (Kwame Asiedu) to enable him contest in the presidential election.

There have been a flurry of suits against the EC in run-up to this year’s general election as many of the political parties which flag bearers were disqualified from the crucial electoral contest, have already gone to court to compel the commission to reinstate their candidates.

The EC is challenging the ruling in favour of Dr Nduom at the Supreme Court, with political analysts expressing apprehension that the commission’s timetable may be derailed.

In the latest suit filed on November 3 through his lawyer Joseph Ayikoi Otoo, the plaintiff wants “an order to bring to this court the decision of the respondents of October 10, 2016 which disqualified the applicant as a presidential candidate for the 2016 general election.”

The Plaintiff is additionally seeking an order to restrain the EC from proceeding with the balloting for positions of presidential candidates.

In his affidavit in support of his application, the Plaintiff claims that on September 23 the EC launched a guide for candidates and their agents and nowhere in the document did the commission mention the stipulated period within which to file nomination.

According to Mr Kwame Asiedu Walker, he personally presented his nomination forms to the EC and it was duly acknowledged.

He averred that it was incumbent on the EC under Public Elections Regulations 2016 C.I. 94 to ensure that everything brought by the aspirants were in accordance with the rules; and where there were anomalies, the commission would allow the candidate to make the corrections within the stipulated nomination period.

The Plaintiff said, “The provision for amendments and alteration within the stipulated nomination period presupposes that the Returning Officer or for that matter the commission, must make provision to receive the forms in good enough time so that where amendments or alterations become necessary, the candidates will take advantage to effect same.”

He said in this case however, the EC fixed 29th and 30th September as the receipt of nominations date adding, “I became a nominated candidate when I presented my forms on the 30th September and I could only have been disqualified after I had been offered the opportunity to make amendments or alterations.”

Kwame Asiedu Walker said the law mandates the EC to give him the opportunity to make the corrections, but the commission failed to do so.

He said that failure by the EC to give him a hearing before being disqualified “is a breach of the rules of natural justice which makes the decision of 10th October, 2016 null and void and of no effect.”

He said C.I.94 provides a special procedure for disqualification of candidates and it is that procedure that must be followed by the commission.

However, Yaw Buaben Asamoah, New Patriotic Party (NPP) parliamentary candidate for Adentan in Accra, has said the litigations in court – five at the last count – means the process of organising the elections is out of the EC’s hands.

YB, as he is popularly called, said a better approach at solving the ligations would have been one decisive court judgment that makes it impossible for the disqualified presidential aspirants to troop to court one after the other to challenge their disqualification.

“The first judge should have reviewed the matter and given a decision to impact the rest because it is possible. They were all suffering from different shades of the same malady,” he said on ‘News File’ programme on Joy Fm on Saturday.

“As it stands now, ‘the issues are out of their hands’.  It will get worse if Akua Donkor decides to go to court and another also follows,” he warned.

And if it is out then questions must be raised about the EC’s assurance to the nation via BBC that the elections will come off and a result will come out.

YB queried, “In the event of an administrative and operational failure, who deals with it?” Supposing they do not meet their commitments to us, what happens?”

He invited the listeners to examine ‘potential scenarios’ in the event December 7 does not deliver the elections.

“I found something very interesting reading the Public Regulations Elections CI 94 Section 16,” he giggled as he built a political possibility.

Mr Buaben Asamoah said if the poll is adjourned more than a certain period of time, Ghana may have no president, no speaker of parliament, the Chief Justice may have assumed the presidency.

Public forum was not to attack John Mahama – United Cadres