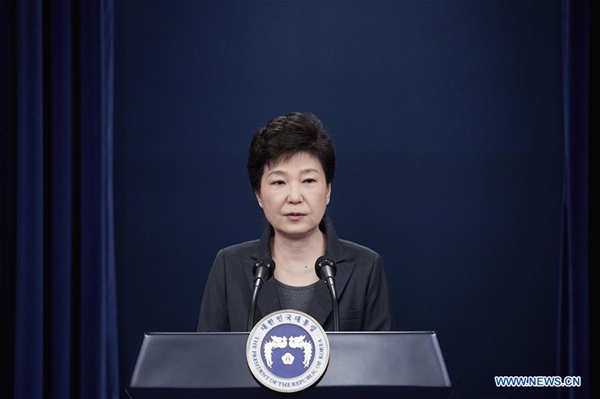 South Korean President Park Geun-hye addresses the nation at the presidential Blue House in Seoul, South Korea, Nov. 4, 2016. South Korean President Park Geun-hye said on Friday that she will accept an investigation into herself, if necessary, by prosecutors over a scandal surrounding Choi Soon-sil, the president’s longtime confidante suspected of intervening into state affairs. (Xinhua/Blue House/File photo)

South Korean President Park Geun-hye saw her approval rating continue to fall despite her second apology to the public last week over a scandal involving her longtime confidante and former aides, a local pollster survey showed on Monday.

Support for Park was 11.5 percent last week, down 7.5 percentage points from the previous week, according to a Realmeter poll of 2,528 adults conducted from Monday to Friday.

The number was the lowest for any South Korean president, keeping a downward trend for five weeks in a row since the scandal surrounding Choi Soon-sil, the president’s decades-long friend suspected of intervening in state affairs, came into focus last month.

According to a Gallup Korea survey released on Friday, Park’s support scores dropped to 5 percent, lower than any other predecessors.

Traditional support base for Park rapidly alienated from the embattled president, with an approval rating in the North Gyeongsang province tumbling 20.1 percentage points compared with a week ago, the Realmeter survey showed. The province is regarded as a political home turf for Park and the ruling Saenuri Party.

However, President Park had a higher approval rating from those in their 60s and older following her second public apology and the acceptance of investigation by prosecutors into herself “if necessary” on Friday.

Daily support scores for the president increased from 23.5 percent on Thursday to 2.4 percent on Friday among voters aged 60 or higher.

In the highly-charged address to the nation, President Park admitted that she lowered her guard toward Choi, who the president said had stood with her during the toughest times.

Park’s toughest times indicate the assassinations of her mother in 1974 and then her father, military strongman Park Chung-hee killed in 1979 by one of his closest aides. Park’s friendship with Choi dates back to the mid-1970s.