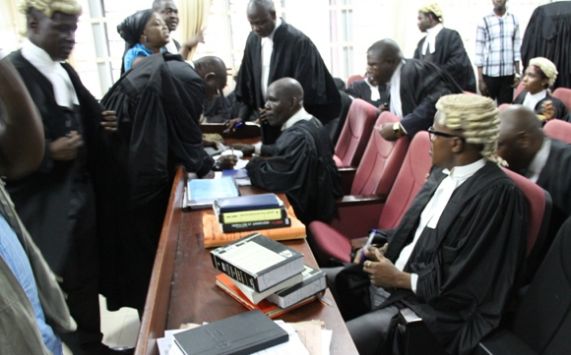 They stormed out of the courtroom during the court proceedings on Friday at a High Court in Akure, the Ondo State capital, after Justice Kumuyi, who presided over the case, did not allow Ogele, who is the counsel for the claimant, to have access to the record of proceedings of the court, having been recently retained by the claimant.

During the proceeding, Ogele prayed the court to allow him have access to the record of proceedings so as to allow him to give proper representation to his client.

He also sought for an order compelling the registrar of the court to produce the certified true copy of the record of proceedings in the case to the new counsel.

Ogele said the case was initially handled by another lawyer, who discontinued his appearance after he was not paid.

Ogele stated that since he took over the legal representation, efforts to get the record of proceedings from the officials of the court had proved abortive.

Agbede also supported the motion of Ogele, saying the new counsel would not be able to give proper legal representation without the record of proceedings.

The counsel to the second, third and fourth defendants, Adetunji Oso and Ola Olawale, said the court should use its discretion.

Justice Kumuyi refused to grant the request of Ogele and Agbede.

The lawyers told the judge that they would not be able to proceed with the case because the refusal of the application would deny the clients a fair hearing.

They subsequently walked out of the courtroom with their clients, leaving the judge on her seat.