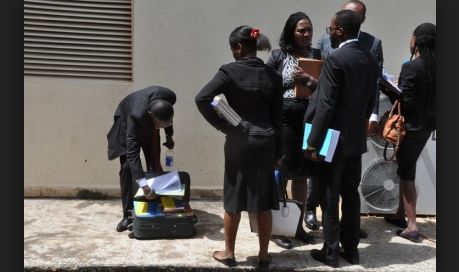 What kind of lawyer is that? A 35 year old legal practitioner Akaniyene Cletus has been arraigned before a Chief Magistrate Court in Uyo for assaulting a female journalist, Blessing Ambrose.

The case, which is between the Commissioner of Police v Cletus came up for hearing before Chief Magistrate Usukuma Akpabio.

Blessing who is a broadcaster with Akwa Ibom Broadcasting Corporation AKBC, told the court that the lawyer had beaten her up and inflicted injuries on her on May 29, 2016.

She said Cletus, who was her co-tenant at No. 6 Umana Uko Lane, off Atiku Abubakar Road in Uyo demanded for a drink when she brought a sewing machine to the compound.

She claimed that the accused beat her up when she refused to provide the drink.

My Lord “I reported the matter to my landlord who intervened and said that he does not want any trouble in the compound.

“Few days later Cletus’ house help came to tell me that my friend that visited does not know how to use the sewing machine. Cletus who was inside his house shouted that I should take the machine out of the veranda immediately.

“He later came out and used his legs and pushed the sewing machine.

“When I demanded to know why he should hit my sewing machine, he slapped me, pushing me down and beat me up.

“I sustained injuries on my knee, eyes, arms and face. When my brother tried to stop him, he beat him up too. People from the compound later came and took me away,” Blessing said.

She said she informed the landlord of what transpired, and that he cautioned Cletus to learn to live peacefully with other tenants or move out.

The complainant further said that on August 7, 2016, Cletus intimidated her with a machete, a situation which made her to report the matter to the ‘C’ Division of the Police at Aka Etinan, in Uyo.

The Chief Magistrate however adjourned the case to January, 9, 2017 for further hearing.