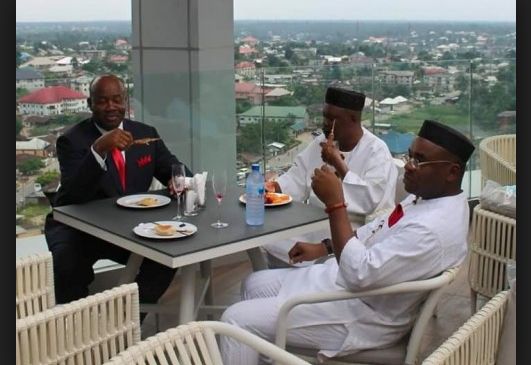 Former governor of Akwa Ibom State, Godswill Akpabio, is facing severe criticisms from people in the state for sauntering into a state function in Uyo with his aides and a crowd of followers, while his successor, Udom Emmanuel, was taking a Bible reading.

The incident, seen as a breach of protocol, happened at the Ibom Hall grounds, IBB Avenue, Uyo, on Monday during a state-sponsored religious ceremony.

There was temporary disruption of proceeding as the crowd kept on hailing Akpabio in the presence of the governor who was “his boy”.

Governor Emmanuel paused for some minutes until Akpabio, who is the Senate Minority Leader, was seated, before he could continue with the Bible reading.

“When Akpabio walked in with his wife and aides, the whole place looked as if it were a political rally,” Franklyn Isong, a newspaper publisher and public affairs commentator in Uyo said.

“This act of former Governor Akpabio to always attempt to belittle his successor at public functions has been taken too far to be ignored by sane people,” Mr. Isong wrote in a Facebook post, adding that the senate minority leader should be called to order.

“If he cannot sit at state function(s) before the arrival of Governor Emmanuel, he has the option of joining the governor’s convoy or stay back from such function when the governor is seated.

Isong insisted, during an interview with Premium Times that Akpabio was deliberately undermining the governor.

Akpabio’s protocol must have been there in advance at the venue of ceremony and must have been updating the senator on the proceedings before his (Akpabio’s) arrival, Mr. Isong said.

Etok Ekanem, a former Commissioner for Agriculture in Akpabio’s government, said the senator’s action was humiliating to Governor Emmanuel.

“I am pretty sure Akpabio would not take (that) from anyone during his tenure as governor,” Mr. Ekanem said on Facebook.

“Let me most respectfully add to the appeal to Senator Akpabio to please, refrain from this practice.”

The attack on Senator Akpabio has dominated the social media for two days now, with some people calling on Governor Emmanuel to fire his protocol team.

He said, “I am sure Governor Udom Emmanuel knows that Senator Akpabio will never undermine his administration.

“Akpabio has been the prime mover of the Divine mandate that Governor Udom is carrying. At a point when many people did not believe in Governor Emmanuel, Akpabio stuck out his neck and stood by him.”

When contacted, the protocol director of Akwa Ibom Government House, Edmond Uffang, refused to comment on the issue.