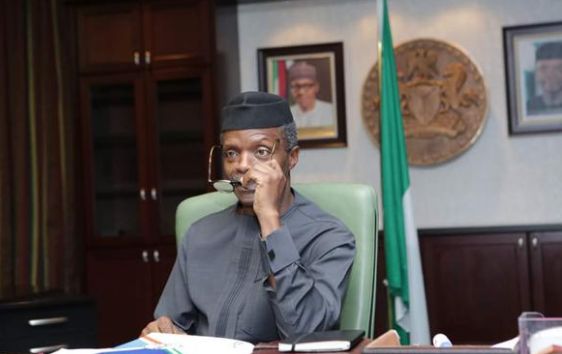 Since stepping in as President and Commander-in-Chief in May, 2015, Muhammadu Buhari has gone on vacation abroad three times and consequently transfered the powers of his office to the Vice President, Professor Yemi Osinbajo.

The last he did was on Thursday, January 19, 2017 – for a period of 10 days. Meanwhile, the country was buffeted with rumours, wild rumours, about the President’s health, as well as unfounded stories about the Yar’Adua/Jonathan-type ugly power transmission and its attendant high-wire politics; all of which have since been debunked by the Presidency.

This piece takes a globular look at the activities of Vice President Osinbajo and his style each time he acts on behalf of President Buhari.
As written by Vanguard’s Levinus NwabughioguThis would not be his first shot at discharging the functions of the Office of President of Nigeria. It is not also the second. It is Vice President Yemi Osinbajo’s third, since May 29, 2015. He is fast learning the job and also proving himself a dependable ally of Mr. President.
READ ALSO:   Lena Dunham’s social media followers in swift decline after she stands up for Girls writer accused of rape

In Nigeria, despite the sacred dictates of the constitution, sitting presidents are not usually known to be generous transferers of the powers of their office to their deputies; instead, they choose to delegate such powers to their Chief of Staff or a “Kitchen Cabinet” Minister.

But that has never been the case with the present administration.

Observers of Nigeria’s politics since the return of democracy in 1999 would recall that the scenario hardly existed between former President Olusegun Obasanjo and his Vice, Atiku Abubakar.

Such was not the case between late President Umaru Yar’Adua and his former deputy, Goodluck Jonathan. If it ever existed, it was between Jonathan and his vice, Namadi Sambo.

But in the present regime, delegating the presidential powers to a deputy has never been a big deal for President Buhari who has always done that.

In the course of his service to the nation in the Fourth Republic, he has had to publicly transfer the powers of his office to his vice.

FIRST TIME OUTFirst was in February 2016 when the President took some five days off for a vacation abroad. While the vocation lasted, Osinbajo held sway as Acting President.

For the period, he oversaw the day-to-day running of the affairs of the country.

The second time Osinbajo was also made Acting President was in June, 2016 when the President also announced a vacation to London to attend to an ear infection.

For the 13 days Buhari was abroad Osinbajo effectively fitted in the shoes of his boss.

Amongst the major tasks he undertook were the meeting with Niger Delta governors and Service Chiefs on the threats of the Niger-Delta Avengers to bomb government buildings in Abuja.

It was also during that time that he inaugurated a Task Force on Rice and Wheat production. That was not all – the launching of Home-grown School Feeding Programme was also done.

Vanguard had observed that most times, he leaves his office as late as 10 pm. Sometimes also, he returns to the office to perhaps, clear his table. We are yet to notice any face-off between him and his boss. In fact, the feeling is that he’s totally loyal to President Buhari.

At the moment, Osinbajo is Buhari’s Man but not his Man Friday.

Your threats to Media unnecessary – Ben Ephson to Judicial Service