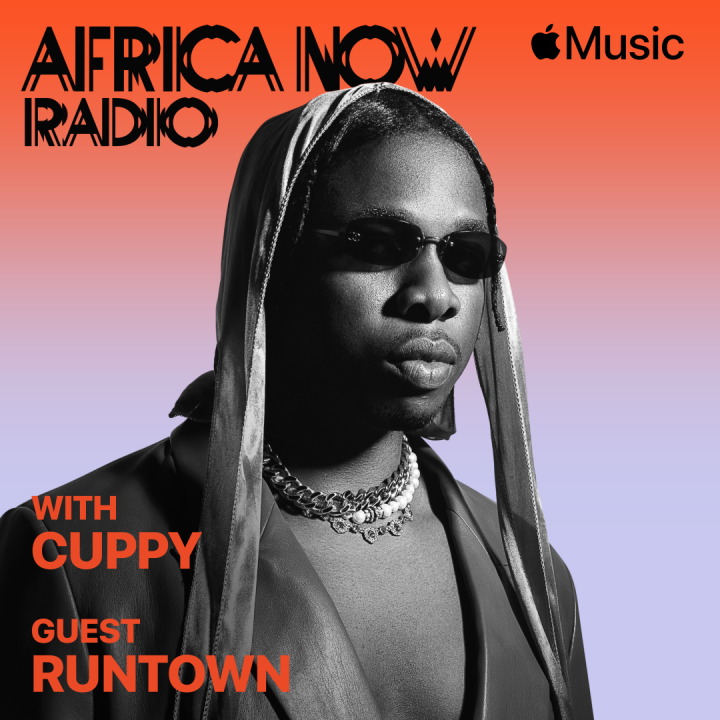 This Week’s Episode Features a Conversation With Runtown, the 5 Hottest Tracks of the Week, and Ama Qamata’s Favorite African Proverb!

Tune in to Africa Now Radio With Cuppy This Sunday, January 10th at 2p Lagos/London / 3p Johannesburg/Paris / 6a LA / 9a NYC Only on Apple Music 1

Cover Star Interview
Nigerian singer, songwriter and producer Runtown is this week’s cover star and joins Cuppy via FaceTime on Apple Music 1 to talk about his latest single “If E Happen for Lagos” which is according to Runtown is “a Nigerian story, with emphasis on the ills of the society, politics and a way of life that is not suitable for the common man.” Runtown tells Cuppy about why “Mad Over You” was a gift and a curse, potentially launching a new fashion line this year, why he wants to make timeless music and his new album coming in February.

Africa Rising
Ghanaian singer, songwriter and producer Amaarae is the latest Africa Rising cover star, a campaign which shines a light on the next generation of African superstars. https://apple.co/32v7zX4

Proverb of the Week
South African actress and star of the series Blood & Water, Ama Qamata, shares her favorite African proverb with Cuppy, which translates as “Closed mouths don’t get fed, if anything is bothering you, speak up.”

Tune in and listen to the full episode this Sunday, January 10th at 2p Lagos/London / 3p Johannesburg/Paris / 6a LA / 9a NYC on Apple Music 1 at apple.co/_AfricaNow

Runtown on why his music is becoming more conscious

“If you notice for my newer releases, if you really pay attention to this, I had to go deeper in the message. I had to be more conscious in the music. Not just conscious in a borrowing way, conscious in a way you’re turning up the act, you’re remembering, all right, you got signed.”

“ ‘Mad Over You,’ it’s really that song as a gift and a curse at the same time. It’s that song that just changed everything, not just for me, but for the whole industry. So you now have to not necessarily live up to that, but a lot of people expect you to have another ‘Mad Over You.’ You know me very well. I love being diverse with the sound, but ‘Mad Over You’ taught me a lesson.”

“Well, a proverb that I know that I grew up with, my mom always used to say is, [Proverb in Xhosa], which basically means like… Well, that’s in Xhosa. I’m not saying it properly. Mom says it better. But in translation it’s, ‘A child that does not cry, dies in the womb.’ And in English, what it means is, ‘Closed mouths don’t get fed.’ ”

“So if you’re not speaking out, if you’re not saying what you want, no one’s really going to know that you have a problem. And I think it’s so important with these tough times that we’re around, if you need help, if there’s anything that is bothering you, we should speak out about it.”

Shatta Wale Backs Edem, Sarkodie And D-Black For The Head Of MUSIGHA (Video)

We did not threaten the media – Judicial Service to GJA

Okonjo-Iweala Meets 164 Delegates As She Resumes As WTO DG