Ghana is on high security alert following the escape of over 1,800 prisoners from the Oweri Custodial Centre in Imo State, Nigeria.

A message from Ghana’s Immigration Service directed all Regional Commanders to prevent the escapees from entering the country.

“Information gathered by the Service indicates that more than one thousand, eight hundred (1,800) prisoners escaped from the Oweri Custodial Centre, Imo State-Nigeria on Monday, 5th April 2021.”

“I am directed to bring the incident to the attention of all controls. You are to inform officers and men under your command to take note and be on high security alert to prevent the entry of these escapees into the country.” 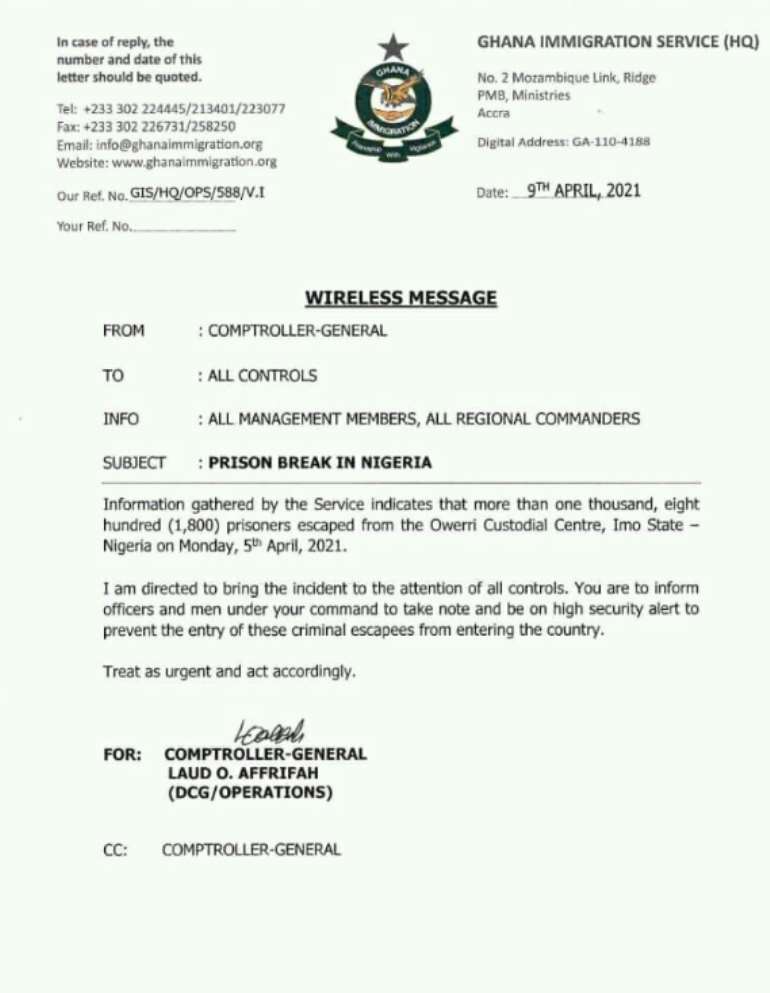 Reports indicate that the 1,800 prisoners escaped after heavily armed gunmen attacked their prison using explosives and rocket-propelled grenades on April 5, 2021.

Although Nigerian police pointed fingers at separatist groups in the West Africa country, none of such groups has so far taken responsibility for the attack.

President of Nigeria, Muhammadu Buhari described the attack as an “act of terrorism” and ordered security forces to apprehend the fugitives.

Nigeria’s security services are currently on a manhunt for the escapees.

A similar incident happened in Ghana, specifically in the Kpone-Katamanso municipality of the Greater Accra Region, where some inmates escaped from jail at Zenu-Atadeka after pouring porridge on the face of one of the security officers.

One of the inmates who escaped from jail recently surrendered to the police.

Six other inmates who escaped have also been re-arrested.