The Techiman Traditional Council has urged the government to fast track the establishment of High Court in the Bono East Region to expedite actions on the dispensation of justice in the adjudication of salient national developmental issues in the area.

The Council noted that to completely gain its independence as a region there was the need for it to have all the state organs including the Legislative, Executive and the Judiciary to fast track and speed up the developmental agenda in the area, stating that the region was a young one and needs to have all this in place to enable it establish the bases and fundamentals of public administration as a region.

The Council led by the Omanhene of the Techiman Traditional area, Nana Oseadeeyo Akumfi Ameyaw IV at the weekend made the call during a working visit by the Bono East Regional Minister Mr Kwesi Adu Gyan at his palace in Techiman, the regional capital.

Oseadeey Ameyaw mentioned that the region still sends its cases such as Politics, chieftaincy and other disputes to other regions including the Bono and Ahafo for dispensation of justice and that this does not augur well and has become a source of worry to the region.

Oseadeeyo Ameyaw indicated that considering the limited resources and nature of transportation coupled with the bad roads in the area discourages justice seekers in applying for their interest.

He said with quality and timely dispensation of justice in the area, would improve equal administration and distribution of resources in the region for uniform development, it would again promote peace and foster unity among people in the region which would improve their socio-economic lives among other things.

Oseadeeyo Ameyaw explained that if all the structures are put in place and working effectively, the region would see mass improvement in education, health, agriculture and the general social development that stand the chance to benefit the youth in the area.

He pointed out that the institution of high justice would eradicate insecurity and promotes stability of peace and unity for effective progress in the trading and businesses as the area is noted with its business opportunities, adding that people would “feel free” to come to the area for business activities among other things.

Oseadeeyo Ameyaw appealed to government to strengthen the chieftaincy institution such as the Regional House of Chiefs with office structures in order to enable it performs its duties to maintain peace in the area.

He urged the Regional Minister to emulate his predecessor and continue with the developmental agenda of the region from where he end as this would promote the total development , he urged the Minister to desist from negative politics and be focused as he is mandated to do as the traditional council was committed to supporting him develop the area.

Mr Gyan assured government commitments to institute a high court in the area as plans were far advanced at its establishment, he said officials from the judicial services were already on the ground for feasibility studies on structuring an edifice for the court.

Mr Gyan in his response to strengthening the chieftaincy institution noted that government had already worked on the construction of an office accommodation for the Regional House of Chiefs, again the Regional Coordinating Council is committed to work with the traditional authority in resolving the existing chieftaincy disputes to promote peace in the area.

Touching on his vision for the region, the Minister assured to promote agro-industrialization which falls in line with government industrialization policies to improve on the livelihood condition of the people especially the youth the region.

He called on the Traditional Authority to support him make the region the final destination for agro raw materials in the country and the world at large. 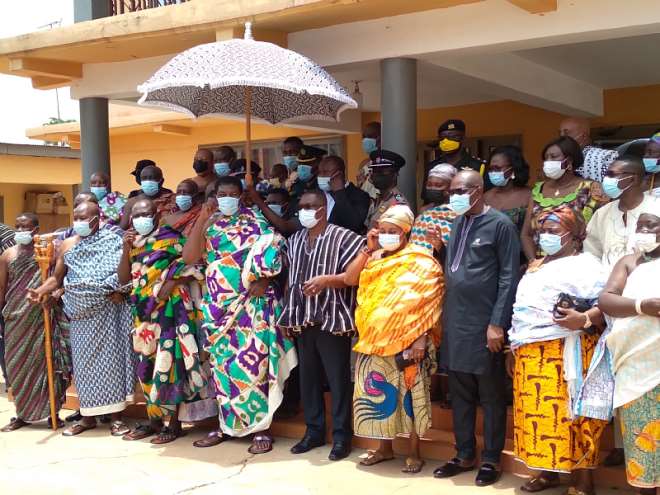