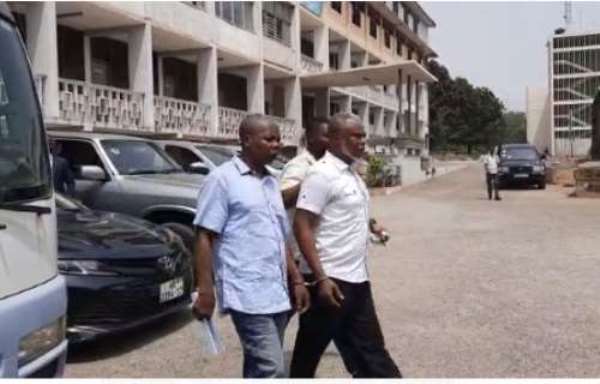 There was controversy in the court over the alleged coup plotters trial as lawyers of some accused persons raised concerns over military escorts for their clients.

Lawyer Eric Pongo who was holding brief for Victor Kodjogah Adawudu told the court that his client Col Samuel Kojo Gameli was being followed around in court by military persons despite being granted bail.

His position was corroborated by Ziyeli Agambila, counsel for Warrant Officer II Esther Saan who also raised issues about how the accused persons were being followed around in court by the military officers despite being on bail.

Counsel said they feel intimated as his client was being followed around in court.

But, a lawyer of the Ghana Armed Forces who is a Squadron Leader Sandra Efusah-Nana Agyemang acting as a friend to the court said, it was part of their protocol.

According to her, the protocol of the Army was to give their officers standing trial morale support.

But the lawyers said they do not need any such support.

Justice Samuel Asiedu, a Justice of the Court of Appeal sitting with additional responsibility as a High Court judge said he sees nothing wrong with such issue.

The court said it would have been a concern if they were infringing on his rights and his liberties were taken away friend.

The court urged him to ensure his client masters and exercise courage.

The commencement of the trial has been deferred to May 4 because three of the 10 accused persons who could not meet their bail were not brought to court due to Covid 19 issues.

She told the court that, Col Gameli and ACP Dr Agordzo will face the charge of abetment to treason felony.