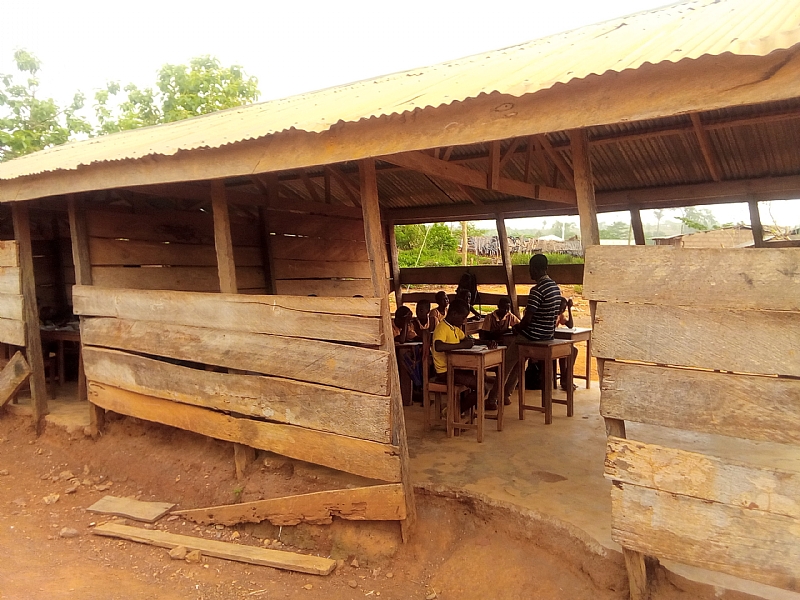 The people of Akrofoauh a rural community near Asempanaye in the Offinso North District of Ashanti region have appealed to the government to intervene and get rid of a death trap structure used by pupils in the community’s only school facility.

The collapsing structure under which Pupils from KG to Primary 6 study during school hours was the community-sponsored project put up by PTA some years ago and is yet to get the attention of authorities in charge for safer schooling despite several calls by community leaders to their aid.

Cruz News’ visit to the area found the learning environment dusty in a completely rotten wooden structure eaten up by termites. This according to some community members forces the children to immediately vacate the premises anytime clouds begin to gather to save their lives.

The news team also realized the inadequacy of the school’s land for which reason they lack a playing field and office for keeping documents hence kids travel some distance for playing ground.

Chief of the village, Nana Adu Amankwaah I in an interview with Cruz News’s Issah Nabila disclosed several steps had been taken to address the challenge but yet to see success. He said a proposal was sent early 2020 to the Assembly by his outfit to come to their aid but has still not received positive results despite several follow-ups.

He added during the 2020 electioneering, Member of Parliament Augustine Collins Ntim himself promised to build the school for them immediately after the elections and that they are currently looking up to him once the election is over.

“We have taken several steps on this matter, even our school compound is very smallish that our kids have to walk distance away from the school to access a playing ground” “this made us sent a letter to the Assembly seeking support from it and MP to get a land for construction of a befitting environment for our children” “when the MP, Collins Ntim came here, during the campaign time, we again put the issue before him which he promised us to get it done once the elections is over. So now that the election is over, we are looking forward to him fulfilling his promise,” Nana Adu Amankwaah, Odikro of Akrofuah told Issah Nabila Salifu

Reacting to the complaints, District Chief Executive Hon. David Akwasi Asare Boakye called for calm and patience on the part of Akrofuah residents as the school is part of his immediate plans once his designation is reaffirmed.

The DCE in an interview with SK De Broadcaster via phone admitted to having knowledge on their need but could not act on it now as he is only a caretaker with funds for Assembly projects ceases coming.

For his part, Mr. Samche Francis, PTA Chairman lamented the horrible condition of the school structure saying it poses a lot of risk to the lives of the kids and needs to be swiftly addressed as indicated by both DCE and the MP in their earlier interactions.

He said although popular fetish priest Nana Kwaku Bonsam who contested in the 2020 parliamentary elections demonstrated readiness to construct the school but was denied the privilege by town folks on the assumption that, the sitting MP, hon. Collins Ntim was about to fix the challenge.

According to the PTA Chairman, another worrying development is the starvation of the school kids despite the availability of government school feeding programs to feed them during school hours.

He shockingly revealed that the kids get food once in two weeks. As at the time, our visit was in session; Mr. Samche Francis could not even recollect the last time the kids were fed and mostly present very small and less quality food to the children.

Meanwhile, the School Feeding Coordinator, Mr. Kamal Nurudeen during an interaction with Cruz News on the issue indicated that food supply has been restored to the place following our report.

These claims were however not denied as he pushed the blame on the caterers who were sleeping on their responsibilities.