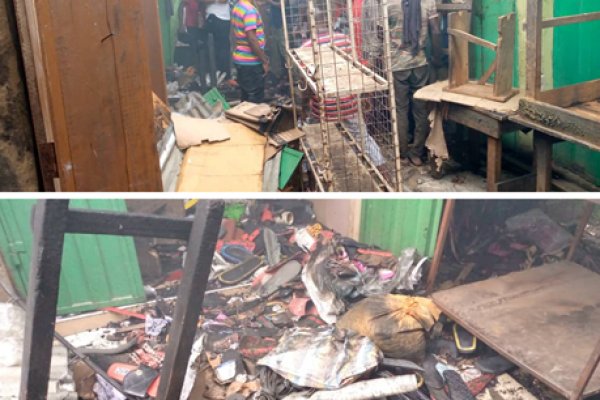 The Ghana National Fire Service (GNFS) has begun investigations into the fire outbreak that swept through some shoe and cobbler shops area (Nkoko Adwasuo) of the Kumasi Central market on Sunday night.

The fire, which was said to have started around 20:00 hours destroyed over 40 shops and their property running into several millions of Cedis.

It took personnel of the GNFS over four hours to bring the fire under control.

Persons whose shops were located close to that section risked to salvage their wares before the fire could reach there.

The cause of the fire is still not known, but the fire officers are blaming the haphazard electrical wiring in the shops in the affected area, which could have attracted the fire from the strong thunderstorm during the rains that evening.

Assistant Chief Fire Officer (ACFO) Mr Henry Giwah, Deputy Ashanti Regional Fire Commander told the Ghana News Agency during the visit that fire officers struggled several hours before getting access to the area and interference from shop owners who were trying to salvage their wares also challenged them during the operations.

He said investigations had begun into the cause of the fire outbreak, but said the haphazard nature of wiring in the area could not be ruled out.

He said the presence of huge volumes of leather and turpentine products which were highly inflammable made it difficult to quench the fire as quickly as possible adding that access to the central market had always been a great challenge during fire outbreaks and called on authorities to ensure that there was space to aid evacuation and emergency services.

An eyewitness, Alhassan Iddris, told the GNA that he was asleep in one of the shops when he heard of the fire outbreak. “I was asleep when I heard of the fire outbreak at the Kumasi Central market. I rushed to the scene, and it was very terrible. So, I tried to help contain the fire, but things got difficult since the fire was so tense. As of the time I came to the market, I was desperate to help put out the fire, so I didn’t really ask for the cause”, he told GNA

The last time there was a fire incident in the Kumasi central market was on July 30, 2020 which affected about fifty shops.