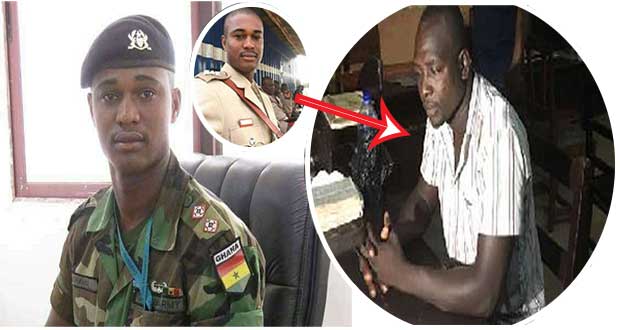 The Assemblyman for Denkyira Obuasi William Baah one of the 14 accused persons who is facing a charge of abatement in the incident which led to the murder of the late Major Maxwell Mahama said he fled the town when he realised the deceased was a military officer.

According to him, he was scared when his attention was drawn to it by the District Police Commander in the area and another friend of his.

Per his two cautioned statements and a charge statement obtained from him by the police when the matter came up for investigations said, the assemblyman noted that one Yaw Amankwa and Kofi Nyame were among those who exchanged gun battle with the late military man.

Chief Inspector Samuel Agyakwa, the case investigator who is also the 14th and the last state witness told the court under further evidence in chief while being led by Mrs Evelyn Keelson, Chief State Attorney.

The Witness told the court that, statements were taken from some of the suspects himself while he received statements from various places where the suspects were arrested.

He told the court that when the suspects were brought to Accra, further statements were also obtained from some of them.

Chief Inspector Samuel Agyakwa said the cautioned statements were taken from them and after the docket was forwarded to Attorney General’s (AGs) office and later received instructions from AGs office and all suspect were charged.

He said the first and the second cautioned statements were both taken at the Cape Coast Regional CID office while the charge statement was taken at the CID homicide unit of the CID Headquarters.

The statements were tendered in evidence without any objections from the accused person’s lawyer.

According to Chief Inspector Agyakwah, the first accused person indicated that, he is a teacher at Denkyira Obuasi and that he had a call from Maame Bono that there was a man with a pistol on him in the area.

He said, on May 29, he (A1) engaged a motor rider who took him to the place. He said, upon reaching the main road, one vulcanizer Akawsi Bour requested to go with him and that reaction from Bour made him to believe he had a hint of what was happening.

For the investigator, Baah noted that, there were others doing communal labour and they also met the man (deceased) on the road and when they realised they were approaching him, he removed his pistol.

The Witness said, Baah indicated, he feared for his life and instructed the rider to take him to the police station to report.

But when he returned with the police, the man had died and the police took the body to the Dunkwaw hospital morgue.

He said, Baah said, information he received was that the deceased fired gunshot at some people and they also lynched him.

The Witness said, Baah said Yaw Amankwa and Kofi Nyame were among the people who killed the military officer and also heard Amankwa was having a gun and heard gunshot firing at the scene.

He told the police that, he picked some pellets while Yaw Amankwa had the gun of the deceased, but he did not disclose the pellet he took from Yaw Amankwa.

He said, he later realised the deceased is a soldier and “this made me scared because it was the Diaso Police Commander who called to inform me,” and that point was corroborated by a female friend.

He said, he later fled to Ampaabin in Upper Denkyira and he later called the District Commander to tell him where he was and was picked up.

The court presided over by Justice Mariama Owusu, Justice of the Supreme Court sitting with the additional responsibility as a High Court judge, adjourned sitting to April 23, 2021.

Go To Hell And Tell The Devil About It!
Water supply to parts of Accra to be cut for repairs
Comment