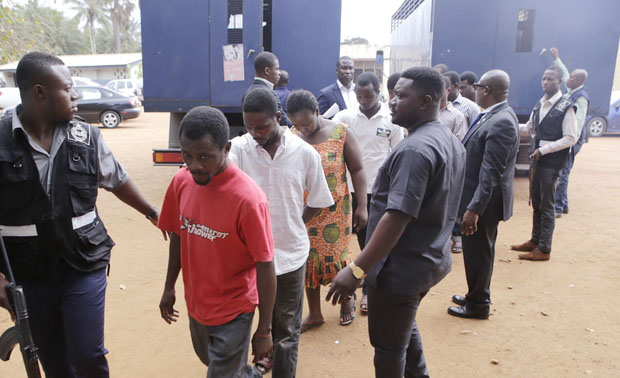 William Baah, the former Assemblyman of Denkyira Obuasi in the Central Region, who is on trial with some 13 persons charged for the gruesome murder of Major Maxwell Mahama has said the soldier pointed a gun at him when the now deceased approached him.

The accused person, in his caution statement which was read in court yesterday, indicated that he had been informed about the presence of a man in the area who was wielding a weapon.

He told the police that as the assemblyman of the area he decided to follow up on the information to ascertain its authenticity.

Baah, who is charged with abetment of murder for allegedly organising the other accused persons to lynch then Captain Mahama, indicated in his statement that he engaged the service of a motor rider and one Akwasi Buah decided to go with him.

He stated that about half a mile into their journey, they spotted the soldier but they decided to pass by him before finally deciding to turn towards him.

He said Akwasi Buah got down from the bike while he (Baah) tried to approach the deceased but he pulled out a pistol on them.

He said he got scared and subsequently decided to report the matter to the police in a bid to get the deceased arrested.

William Baah added in his statement that by the time he and the police got to the scene, the late Major Mahama had been lynched by a mob.

He went on to state that while at the scene, he heard that one Yaw Amankwa, who is on the run, and Kofi Nyame, one of the accused persons, were among those who killed the soldier.

He added that he also heard at the scene that Yaw Amankwa had a gun and had exchanged gunshots with the deceased and he (Baah) had taken two pellets from Yaw Amankwa but did not inform the police about it because they had asked him to retrieve the late Major Mahama’s pistol which was missing.

He said he later heard that the deceased was an Army Captain and out of fear he fled the town and later called the Duaso District Police Commander and directed him to where he (suspect) was and “he came for me.”

READ ALSO:   This Video Of Lizzy Oke Dancing With Her Husband At Their Wedding Proves True Love Isn’t Dead

The statements were tendered in evidence by the investigator, Chief Inspector Samuel Agyakwa without any objection from the defense lawyers.

Another accused person, Bismark Abanga, in his statement said that on May 29, 2017, he was home working on a TV set when he heard an unusual noise in town.

He said he wanted to go and see what was happening but his wife told him not to go because gunshots were being fired.

He said his apprentice called Kwaku went and later came to tell him that an armed robber was arrested and was being beaten.

Abanga indicated that he went to the roadside and saw the alleged armed robber being beaten ‘from all angles’ so he picked a dry cocoa pod and threw it but it did not hit him.

He added that there were about 200 people at the scene and he managed to pull the late Major Mahama’s jeans trousers up to his knee level but one Akwesi Boasie pushed him to the side and he could not tell why he did that.

He said he also left the town upon hearing that soldiers had stormed the place, and returned four days later and was arrested.

Meanwhile, lawyers for 11 of the accused persons have objected to the tendering of the caution statements and charge statements of their clients on grounds that they are confessions and hearsays which were not voluntarily given, and therefore cannot be relied on in the trial.

The prosecution led by Evelyn Keelson, a Principal State Attorney, opposed the objections saying the statements were given voluntarily by the accused persons in the presence of independent witnesses.

The court, presided over by Justice Mariama Owusu, a Supreme Court judge sitting with additional responsibilities as a high court judge, adjourned the matter to April 30, 2021, to conduct a mini trial to determine the admissibility of the statements.