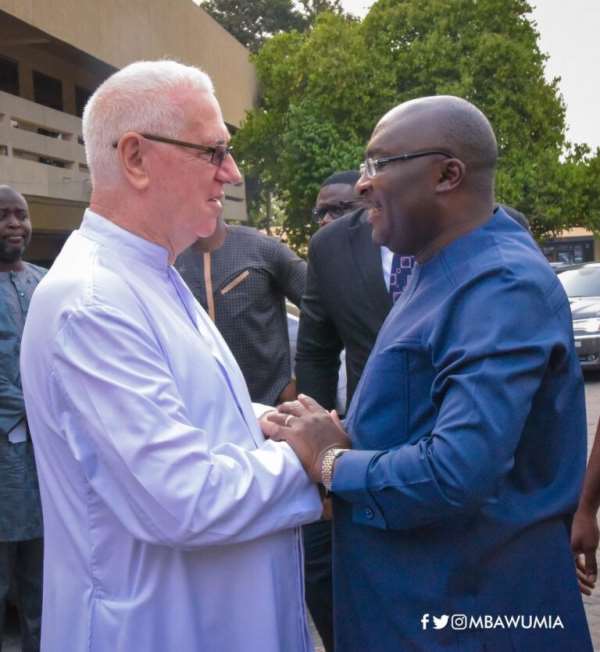 The Parish Priest of the Christ the King Catholic Church, Rev Father Andrew Campbell, has described the benevolent support his Christ the King Soup Kitchen and Lepers Aid has been receiving from Vice President Dr. Mahamudu Bawumia in aid of the poor as “an honour and a privilege.”

Father Campbell oversees a charitable programme by the Christ the King Parish which feeds lepers and street children, and he says Vice President Bawumia has been one of the biggest donors to the programme.

Speaking at the Jubilee House on Friday, where an Iftar (breaking of Ramadan fast) was held in honour of the National Chief Imam’s 102nd birthday, Father Campbell

commended Vice President Bawumia for his kindness towards the poor and appreciation of religious diversity.

“How beautiful it was in Christmas when the Vice President gave me a present of 2000 bags of rice to be distributed to the poor and needy,” Father Campbell revealed.

READ ALSO:   'Woman On Top' Is Most Dangerous Sex Position

“2000 bags of rice; I was able to distribute to all the lepers all over the country, street children in Accra and Kumasi and many other institutions. About 51 needy institutions in this country, I gave them their Christmas gift of rice from the Vice President.”

Father Campbell was fascinated by what he described as a beautiful partnership between a priest and a Muslim Vice President to aid a Christian initiative for the poor.

“A Catholic Priest working hand in hand with a Muslim Vice-President was an honour, was a privilege.

“And it is so beautiful; a Catholic Priest and a Muslim Vice President. What an honour! What a privilege!

“I thank His Excellency so much. He has taught me a lot and I am so grateful.”

READ ALSO:   Kenichi Yatsuhashi admits Hearts of Oak are far from their best

As he wished the National Chief Imam, Sheikh Osman Nuhu Sharubutu a happy birthday, Father Campbell noted that the Chief Imam is another notable Muslim who has given him a deeper perspective of how Christians and Muslims could peacefully co-exist.

He recounted what he described as an unforgettable experience of the Chief Imam visiting the Christ the King Church in 2019 to mark his 100th birthday.

“I always remember two years ago when the Chief Imam came to Christ the King Catholic Church. We prayed together and thanked God for the gift of his life for 100 years.

“A day that was a historic visit and I was very privileged to be the priest overseeing the mass that particular day. That’s one of the highlights of my stay here in Ghana when the Chief Imam came to visit me on his 100th birthday.

“It got me thinking about the similarities between the Catholic Church and Muslims.”

Father Campbell maintained that Muslims and Christians have many things in common and urged followers of the two major religions in Ghana to unite and do more for humanity.

“We have many things in common so let us unite in our faith. Let us unite in sharing, caring, in protecting families, in taking care of the poor and the needy and in respecting one another.”