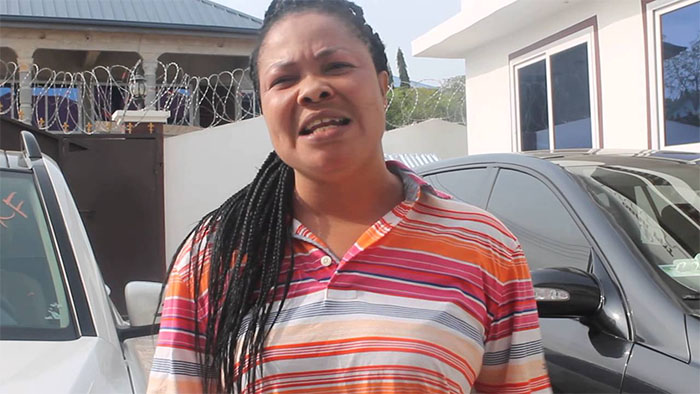 Controversial fetish priestess, Patricia Asiedua, aka Okomfo Agradaa, who was arrested for fraud recently, is still in jail and could be spending the weekend there.

She got out of jail on Thursday after her highly publicised arrest on Wednesday but was quickly re-arrested by the police, supposedly over a complaint filed by Reverend Kwaku Antwi, popularly known as Rev. Obofuor, founder and general overseer of the Anointed Palace Chapel.

Agradaa and Reverend Obofuor are bitter enemies and have been engaged in social media war of words for some time.

On Thursday, a circuit court presided over by His Honour Emmanuel Essandoh granted a GH¢50,000 self-recognizance bail to Agradaa.

The judge also ordered her to deposit her passport at the registry of the court as part of the bail conditions.

She pleaded not guilty to the charge of fraud and will appear in court again on May 12, 2021.

However, Agradaa was immediately re-arrested by the police after the bail in relation to another case.

It then turned out that it was Rev. Obofuor who had filed a complaint against her for allegedly insulting his wife.

There are also claims that Obofuor reported Agradaa to the police because she had accused him of eating human flesh and drinking human blood.

Agradaa was then captured in a video recording in the court’s premises saying, “Everything is alright. I have finished with this case and I’m going into another case. They said Obofuor claims I have insulted him so he has filed a case against me and I’m going to face him on that one.”

Ahead of Agradaa’s arrest, Rev. Obofuor, who said the fetish priestess had been insulting him for about three years, vowed to deal with her if she did not retract some comments she supposedly made about him.

He also attacked Agradaa, calling her ‘Okomfo Slay Queen’ and also called her husband all sort of names.

Agradaa then returned Rev. Obofuor’s fire and dared him to ‘face’ her if he was a man.

“…yes I can’t compare my husband to you because you’re not his class, you know why? It is because you chew human flesh and he doesn’t!” she said, adding, “If truly you have the balls, come and mention my name Agradaa, you’ll feel the heat and I’ll show you where power lies.”

Her Thunder and Ice1 television stations, both transmitting signals from their Kasoa base in the Central Region without license from the licensing authority, as well as 47 other networks, were all shut down by the National Communications Authority (NCA) on Wednesday.

According to the authorities, Agradaa has been using her Thunder TV, in particular, to advertise ‘Sika Gari’, a supposed money-multiplying ritual intervention, which she describes as her personal god and advertises lavishly.

DAILY GUIDE police sources said a number of people have come forward claiming Okomfo or Nana Agradaa, as she is often referred to, duped them and have subsequently filed official complaints against her.

The fraud charges pressed against her were lodged in different police stations across the country, and in all the complaints filed, they mentioned ‘Sika Gari’ as the reason for being defrauded.

A video has popped up showing the controversial Agradaa defending her ‘Sika Gari’ rituals, giving reasons she dupes those who want to be rich overnight and makes her hoodlums attack such people when they try to prove stubborn.

Agradaa, in a cynical fashion, tried to quote from the Bible by saying that the “Holy Book even says that a fool will sweep his home and bring the money to the wise one.”

She then said spiritual matters cannot be proven in court and appeared to speak with impunity.

Police officers and National Security Intelligence operatives in collaboration with officials of the NCA on Wednesday arrested Agradaa and shut down two television stations belonging to her.

During the operation, agents seized two equipment, which were said to be used in the illegal transmissions.

In the aftermath of the murder of 11-year-old Ishmael Mensah Abdallah by two Kasoa teenagers, one of whom claimed to have fallen for a television advertisement about a money-multiplying ritual, there has been an unbridled public outcry against channels undertaking such commercials.

The television space is choked with all manner of commercials promoting assortment of spiritual interventions, some of them putting morality on the line.

In the heat of the public outcry, many lashed at the relevant regulatory authorities for their seeming apathy as the television stations flourished with their undesirable contents.

That some of the stations even operated illegally, adds to the puzzlement of members of the public who want to know why there had been such a delay in clamping down upon the illegality.