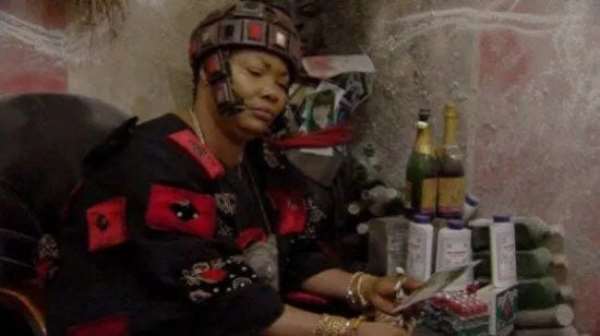 Embattled priestess Nana Agradaa, known in real life as Patricia Asiedua, has set fire on all the idols in her shrine after she confessed giving her life to Christ.

Nana Agradaa who said she has repented from fetishism called on some pastors, including her husband, who is also a pastor to pray for her and help her do away with her old gods on Thursday, April 29.

On Thursday morning, Nana Agradaa in the presence of the media, gathered all her idols in her shrine, in the company of her husband and pastors set fire to all her deities to show the seriousness of her repentance to Christ.

Nana Agradaa was arrested for operating two TV stations without a license. Her two TV stations, Thunder TV and Ice1 TV were shut down with 47 others in the country.

She was arraigned before an Accra circuit court and pleaded not guilty to the charges levelled against her and was granted bail on the condition that she deposits her passport at the court’s registry.

READ ALSO:   Ghana Gas assures of gas by next week

She was re-arrested shortly after she was granted a GHC 5000 self-recognizance bail on Thursday, April 22.

At a press conference she organized after her release from police custody, Agradaa expressed relief from her brush with the law and confessed giving her life to Christ.

According to the priestess, Jesus saved her and thus changed her name from Nana Agradaa to Evangelist Patricia Oduro Koranteng.

The former priestess is the wife of Pastor Eric Oduro Koranteng and a mother of two children. She has thus apologised to all the pastors and individuals she has offended for pardon, as a new person in Christ.