Russian security experts – if not the Kremlin – were coming to grips Friday with the likelihood that the Malaysian Airlines Flight MH17 was shot down by an advanced air defense missile wielded by pro-Russian rebels in Ukraine’s eastern Donetsk region.

If the allegations prove true, they warn the global outrage against Russia will be comparable to the white-hot fury that took hold after the USSR shot down Korean airliner KAL 007 in 1983 after mistaking it for a US spy plane.

A similar level of isolation and world-wide condemnation could be facing Russia now, they say, unless President Vladimir Putin takes decisive steps to demonstrate that the Kremlin wants to be a constructive actor amid Ukraine’s spiraling crisis.

“The facts will inevitably come in, and if it is shown that Russian-supported rebels did this, the whole conversation about Ukraine will change,” says Alexander Golts, a military expert with the online journal Yezhednevny Zhurnal. “In the eyes of the world there will be no difference between Russia and the rebels. Everyone knows who arms and supports these rebels, and that will be enough for most people to blame Russia.”

Some argue that it’s possible the horror of the airliner’s downing in the heart of Europe could force all sides to step back from the escalating hostilities in eastern Ukraine and the increasingly vicious “information war” that has accompanied it. 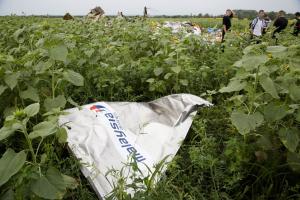 A piece of a plane with the sign “Malaysia Airlines” lies in the grass as a group of Ukrainian coal miners search the site of a crashed Malaysian passenger plane near the village of Rozsypne, Ukraine, eastern Ukraine Friday, July 18, 2014. Rescue workers, policemen and even off-duty coal miners were combing a sprawling area in eastern Ukraine near the Russian border where the Malaysian plane ended up in burning pieces Thursday, killing all 298 aboard. (AP Photo/Dmitry Lovetsky)

READ ALSO:   “Jesus When Did This Happen”- Ghanaians React To Sad News Coming From Kwame A-Plu𝙨

“Much will depend on how Russia behaves now,” says Alexei Makarkin, director of the independent Center of Political Technologies in Moscow. The key players in the Ukraine drama are poised at a crossroads, he says.

“A compromise aimed at avoiding any further escalation is possible. But the West will demand that Russia leave eastern Ukraine for good, and many in Russia will not accept that. So, it’s also possible that we’ll see a severe aggravation of our position, with tougher sanctions and US supplies of military aid to Ukraine,” Mr. Makarkin adds.

The Kremlin has so far confined itself to expressing condolences, calling for a full and objective international investigation, and President Putin’s blanket suggestion that, whatever the truth may turn out to be, Ukrainian leaders will have to shoulder the blame since it is they who have turned eastern Ukraine into a war zone.

“This tragedy would not have occurred if there were peace in that country, or in any case, if hostilities had not resumed in southeast Ukraine. And certainly, the government over whose territory it occurred is responsible for this terrible tragedy,” Putin told a government meeting Friday.

But experts say the issue of who actually pulled the trigger, and where they obtained the sophisticated air defense missile needed in order to destroy a plane 5 miles above, is going to be central to the tense conversations of the next few days. Russian security experts say that only the US has the satellite and other surveillance capabilities to pinpoint the exact location of the missile launch, which will go far in determining who did it.

The Russian media unanimously blames Ukraine for the shootdown, and uncritically accepts the claim of pro-Russian rebels that they do not possess any weapons capable of hitting an airliner at that altitude. Russia’s Defense Ministry says it intercepted Ukrainian radar signals showing that pro-Kiev anti-aircraft forces were active in the Donetsk region during the critical hours in question.

However, circumstantial evidence is piling up that rebels not only obtained at least one BUK mobile air defense system, but that they bragged about it in widely published Russian media reports late last month. Pro-Kremlin propagandist Sergei Kurginyan, who has been in close touch with rebel leaders,claimed a few days ago that he had arranged for “competent people” to be dispatched from Russia to teach the rebels how to use the weapon.

The BUK mobile anti-aircraft system is a Soviet-era “theater defense” weapon designed to accompany troops into the field and protect them from air attack. Russian experts say it’s quite certain that as Kiev fortified its borders against an expected Russian invasion in recent months, those forces would have included BUK units.

“It’s quite likely that if the rebels obtained BUK units, they took them from Ukrainian forces. It’s a forward deployed weapon [and] it’s known that Kiev forces had them in the border areas, including Donetsk,” says Mr. Golts, the military expert.

“It seems unlikely to me, but if it should emerge that Russia actually gave a weapon of this type to the rebels, that would be really explosive,” he says.

In any case, the use of such a weapon in what has until now been a low-level conflict is a major escalation, experts say.

“If it turns out the rebels did this, and Putin does not strongly condemn them, there will be much more pressure on Russia,” says Sergei Strokan, foreign affairs columnist for the Moscow daily Kommersant. “We keep talking about this ‘information war’ that’s going on, well, Russia will lose it irrevocably…. If Putin does condemn them, he will have to take more concrete steps. There are probably some hard-core rebels who will go on fighting even if Russia seals the borders and disavows them. But without the support of big brother, the insurrection in its present form will probably end,” says Mr. Strokan.

“But in the event Russia doesn’t take convincing steps, Putin’s whole strategy of dividing the US against Europe in the sanctions debate will fail spectacularly,” he says. “This tragedy has shocked and galvanized Europe, and really tough sectoral sanctions and a united front against us are what we can look forward to.”

Alexander Konovalov, president of the independent Institute of Strategic Assessments, says that pressures to find a peaceful settlement in Ukraine are going to grow no matter how blame is eventually distributed.

“Things are clearly out of control down there. The world can see that such a local conflict is a threat to all. It needs careful investigation, and the truth must come out. But it’s clear that, whatever that may be, we have to work together to take this thing in hand before more awful things happen,” he says.