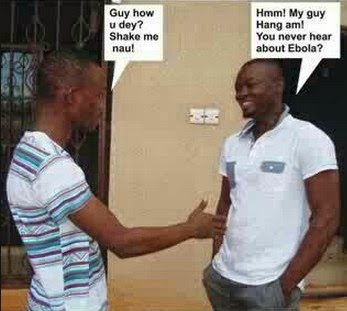 The outbreak of the deadly Ebola Virus Disease has started distorting social and economic life in Nigeria. Many motorists and travellers on the Lagos-Benin Expressway are familiar with Ohosu, a small community well known for its rows of roadside canteens. Travellers often stop briefly at these canteens to savour the delicacies and other culinary wonders that they offer.

Most visitors are lured to the place by the promise of a delicious meal of eba or starch with banga soup and bush meat. On a good day, the canteens would be crowded and the diners would have to wait patiently for their turn to be served.

But, last Thursday, familiar crowds of famished and weary travellers were curiously absent.

While the aroma of cooking hung heavy and heady in the air, a group of female attendants engaged in a competition of a sort to attract the attention of the few customers that stopped by for lunch…

Punch correspondent, who was on his way to Ekpoma in Edo State, settled in one of the canteens, alongside three other travellers: a man and two women. No sooner had one of the attendants approached the women to take their orders than a mild drama ensued.

“What will you eat, madam,” the waiter asked one of the women.

“We have eba, starch and banga soup,” came the reply.

“What kind of meat do you have?”

The second woman cut in then, looking a little alarmed. She said, “I beg you, tell us the truth. I don’t want to die o. There is Ebola everywhere o”.

A little confused, the waiter quietly told the women that ‘bush meat’, in whatever form, had been suspended from the menu because customers were no longer requesting it. The women sighed with relief and relaxed. Afterwards, they talked about Ebola, the deadly virus that is currently rampaging West Africa.

Cloud of fear
The conversation at Ohosu, no doubt, reflects the general mood towards the incursion of the dreadful Ebola Virus Disease in Nigeria. One of the immediate consequences of the presence of the virus is that most people, especially residents of Lagos, are living in great fear of the unknown. Everywhere you go, you would find small groups of people discussing this emerging plague in tones that betray their collective dread of the virus.

Barely two weeks after the ‘infamous’ Liberian, Patrick Sawyer, was diagnosed with the virus, a cloud of fear – deep and pervasive – appears to have settled over the entire country. It is fast burrowing into the fabric of society, forbidding intimacies and the gathering of people even in holy places.

Once rated in a UN survey as the ‘happiest people’ in the world, Nigerians seem to have lost their natural good humour and increasingly more people are scared of shaking hands with or hugging other people, especially strangers, for fear of getting infected with the virus.

Another disturbing dimension to this suffocating scare occurred on Tuesday when it was reported that some private hospitals in Lagos refused to treat patients showing symptoms of fever.

A report credited to the News Agency of Nigeria stated that the hospitals acted in such manner because of the need to prevent infection with the Ebola virus.

Some medical personnel in one of the hospitals were quoted to have admitted that they did not attend to the patients because they wanted to protect themselves from the virus.

One of them said that workers in the hospital had resorted to wearing protective face masks and gloves in order to avoid infection.

Also, recent pronouncements and decisions by some state governments in the country are bound to make life more difficult for the people in the days ahead. For example, a Lagos resident, Adaeze Nwosu (not real name), and her relations are torn between burying her cousin, who has just died of cancer in a major Lagos hospital, in the city or waiting till the government of her home state lifts its ban on corpses coming from Lagos State.

“It is like standing between the devil and the deep blue sea. Right now, we are confused,” she said.

Scared celebrities
For most Nigerian celebrities, the fear of Ebola is the beginning of wisdom. In fact it is one virus that knows no discrimination, irrespective of social status or income. Little wonder Nollywood actress, Annie Idibia, was so frightened recently that she abandoned an event mid-way. Later, she confessed via her Instagram account that the fear of contracting the virus had made her very uncomfortable at the event.

However, while his colleagues are busy campaigning against the possible spread of the deadly virus, controversial singer-turned-pastor, Soul E, claims to have all the answers to the Ebola scourge.

Prophet Soul E, as he is now known, sent out a broadcast to his contacts on Blackberry messenger, where he said that Ebola is not physical but spiritual.

His message read, “Everyone is talking about Ebola. People are even wearing hand protection and some even cover their noses. Hear me, Africa: Ebola is not physical; it is spiritual.

“There is good news, the solution is simple; if you are my son or my daughter, buy olive oil, read Psalms 27 and 29 into the oil. Rub your body with it daily before you leave your house. That devil of Ebola is a bastard. I prophesy as a prophet in this land that the end of Ebola has come. You are protected in the name of Jesus.”

Strained family reunions
For the Taiwos, a family living in the Ogba area of Lagos, the long vacation usually affords the family the opportunity to go to Ikota in the Eti Oa Local Government Area of Lagos State. It used to be a period of reunion with cousins and other family members. But, this year is different for the family. In an interview with our correspondent, Mr. Laolu Taiwo says his children have shelved their initial plans.

“The children were looking forward to seeing their cousins again. It is an annual ritual for us because my younger sister stays at Ikota and we don’t see each other as often as we would have wanted. But the outbreak of Ebola has forced us to have a rethink. Even if the children did not go out of the house at Ikota, they would go to church and certainly run errands in the neighbourhood.

“We have decided to keep them at home for now. My sister understands our intentions. Let us hope that the outbreak will be contained soon. But it is too risky to send children out of the house for a long period now,’’ noted Taiwo.

The Taiwos are not the only people scared of the Ebola virus and that all it represents. As long as the virus lasts in Nigeria, Mr. Akanbi Martins – who works with a popular bar on Victoria Island – has vowed to wear hand gloves to work permanently.

Mr. Martins drives to work in his Peugeot car, but he takes passengers along with him to augment his meagre income. Although the passengers sometimes poke fun at him, his faith in the self-imposed ‘insurance’ against the deadly virus seems to be unshakeable.

“What do you expect me to do? They say we should buy sanitisers and wash our hands. Who benefits most if not the soap and sanitiser sellers? If my hands are not exposed to the money my passengers give me, then I would need less soap and sanitiser,” he said.

One of the man’s passengers says, on condition of anonymity, said that she does not have a particular strategy to beat the disease. According to her, she has left it all to God as no precaution can be enough.

She says in Pidgin English, “We hear say two doctors wey treat patients for Liberia catch Ebola. If dem fit catch am for hospital, na im be say we no dey safe. Na to leave everything to God I dey.”

No longer business as usual in churches, mosques
Interestingly, in places of worship across the country, the fear of the Ebola virus waxes supreme. For instance, the leadership of the Catholic Church in Lagos State has temporarily jettisoned some of its long-established practices. In many of its parishes across the state, the traditional sign of peace, which involves shaking of hands among the faithful, is, in the interim, no longer encouraged. There is embargo in the use of the Holy Water Fonts at the entrances of its churches also.

Besides, the church has advised its priests to be cautious while attending to the sick and administering the Holy Communion, just as it is organising emergency health talks in many of its parishes with the EVD as the major subject.

Last Sunday, at the St. Francis Catholic Church in Idimu, Lagos many couples, who ordinarily embrace one another during the rites of sign of peace, looked askance as their parish priest, Rev. Fr. Ubong Attai, skipped that aspect of the ceremony.

Beyond these measures, many of Catholic faithful are not taking anything to chance. Investigation showed that in some parishes, ‘communicants’ now have the option of receiving Holy Communion in their hands, obviously in line with the new directive that there should be less physical contacts among people. Before now, a priest performed that indulgence by placing the communion (host) in the mouth of the “communicants”. Again, the verve accompanying exchange of greeting moments after church service is no longer high as many faithful now keep to themselves.

For many business operators around the Synagogue Church of all the Nations, Ikotun, the EVD scare has brought bad tidings. Since last week after its General Overseer, Pastor TB Joshua, directed the suspension to his healing ministry programmes, there has been a lull in business transactions in the neighbourhood. In fact, the surrounding hotels and operators of emergency flats-turned lodging havens, which hitherto were a beehive of activities, have been witnessing poor patronage.

According to one of the canvassers, who lives on the commission he makes from soliciting customers for the hotels and the emergency accommodation homes in the vicinity, it is a bad time for them.

The canvasser, who simply identifies himself as Segun, admits that EVD scare has impacted negatively on their fortunes.

He said, “My brother, it is no longer business as usual. The past one week has been bad. People for some days no longer visit this place enmasse to seek divine intervention since after the announcement suspending the healing programmes. Look around, even inter-state transporters, who bring people from other states to this place, have reduced.”