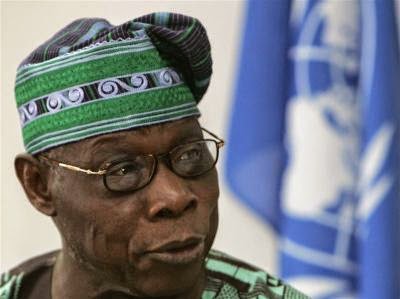 The economy is so bad today. The only ones living large are those stealing government money with impunity:

Former President Olusegun Obasanjo yesterday drew similarities between the present state of the economy and the way it was during the regime of General Sani Abacha, saying the current situation has wiped out the middle class.

Obasanjo said a distress message he received from a Nigerian requesting financial assistance clearly indicated that the middle-class has been destroyed. The former president, who was addressing a group of traders who visited him in Abeokuta on Sunday, read out the distress message sent to him by SMS.

“I told him (sender of the message) we experienced this at the time of Abacha, the middle class was completely destroyed”, Obasanjo said.

The former president also told his guests about a Senior Military personnel who could not afford a new car, saying that was a big surprise to him. He said: “I was surprised the day a Colonel in the Army came to me complaining that he and his family could not afford to buy a car (without stealing government money).”

Obasanjo also cited a medical doctor’s family that had to relocate outside the country to survive. “A friend, Dr. Okoro, was a medical doctor, his wife was also a medical doctor and they have a daughter who is also a medical doctor, but they could not afford a new car, and had to go to Saudi Arabia”, he said.
But he said the situation did not change his conviction that tough times do not last forever, and when tough times come, tough people get going.
On the way forward, he said Nigerians have to be alert and vigilant, adding, “To be fore-warned is to be fore-armed, if we will get ourselves out of the morals we find ourselves in, it has to be done by each and every one of us. We all have contributions to make and should not leave our responsibilities for others. If we fail to participate in things that are meaningfully positive for this country, we will all become victims”.
READ ALSO:   Pool water contains a certain amount of Human waste

He said as far as the next political dispensation is concerned, he could not decide yet.
“As for me, we don’t know where we are going yet, may God show us the way to take this country and make it great. For me, I understand and I see the way, I will tell you, I pray that God will show me the way, may God show you the way.”