In Asanti Twi ‘toa’ literally means bottle. Therefore, Toa House rightly means bottle house. That is the innovative technology Paul Coffie is using to provide affordable housing for city dwellers. It is quite unbelievable to know, for the first time, that a house can be made of bottles, which is even 20 times stronger, and 30 percent less costly than the normal block and brick houses. What is more, the toa houses are bulletproof. Yes, you heard right—bulletproof. Read on as Paul explains to the B&FT how all this innovation began.

Paul Coffie Bebobru Jnr, the CEO of Toa House, was raised by a single parent—his mother, in Accra. He is a product of the famous Mfantsipim School in the Central Region, and graduated with a degree in Business Administration from the University of Ghana Business School.

After school, he landed a job with a recycling company in Accra, which recycles bottles and exports them out of the country.

Paul proposed to the owner of the company that it would be helpful if the bottles are put to an innovative use such as manufacturing of tiles, roofing sheets, construction of houses, among others, rather than exporting them. But his boss didn’t share his vision.

That business idea kept lingering in Paul’s mind like a burning fire. A day did not pass by without him thinking about it. It kept distorting his sleep until he decided to take an important step in his career. He resigned.

After Paul took a bold decision of resigning, it was now left for him to establish his own business. But that won’t come easy. He had to, first of all, gain some training in his newly-found business, and find capital to start.

A determined mind will always find ways and means to make a dream a reality. That is the man Paul—fully determined. He remembered that, while working with the recycling company, a delegation from Kenya, where the bottle houses are very common, came to offer training to the staff. So quickly, he contacted them and they offered to train him freely; only he had to take care of his accommodation and upkeep.

With the money he saved while working, he travelled to Kenya for the training. When he came back, his mother supported him with some funds to set up his business. With that support, he began the Toa House project. 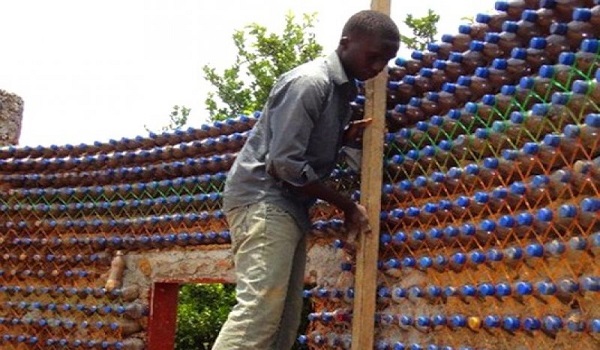 In fact, it is unbelievable what some of the features of the Toa house are.

“We fill the bottles with sand, which we call bottle bricks. Bottles have an elastic nature and so they are earth quake resistant. The bottle bricks are twenty times stronger than the brick or block houses. They are about 13 inches, whereas, the normal cement blocks are usually five or six inches.

The bottle bricks are also fire-proof, in that, there is a bit of clay added when constructing the house. It maintains the room temperature. Above all, the structure is 33 percent less costly than the normal brick or block house. You need close to about Gh?70,000 to complete a two-bed room house made of cement blocks, but you need between Gh?35,000-40,000 to build a Toa house of the same size”, Paul explained.

Paul says the major challenge he has had to contend with since he began this business is negative perception.

“It is difficult to change the mindset of people to an innovation. People are normally not open to trying something new that they do not know.”

He has also got the chance to travel to South Africa to showcase his innovation to some investors who expressed interest in it.

Currently, the building project engages more than 100 people in the value chain, providing employment for many. There are bottle collectors, those who fill the bottles with the sand, the construction workers, among others.

READ ALSO:   Did you know 2face once tried to be a goalkeeper?

Even though his kind of business is not very common to many, the few people who have come to know it have received his innovative and affordable houses well.

He has the goal of creating a gated community which he will name the Toa Village. This will comprise of a one-bed and two bed-room houses, which is aimed at providing affordable housing for all.

He wants to move it to another level and introduce another kind of product known as the Prefabricated houses, one of the affordable houses common in the US.

Toa House has the vision of becoming the leading provider of affordable homes, not only in Ghana, but in Africa.

Paul has no background in construction but with his business administration degree, he is able to manage his technical men and run the business in a very effective and efficient manner. Again, it is said that knowledge is power, so Paul still reads books that enhance his knowledge in the area.

“Ghana is a country of great opportunities,” he says. “I think a lot of unemployed youth fail to see the opportunities around them. If you are unemployed, you need to sit down and look around you; you will find an opportunity somewhere.”

‘Do Not Turn Your Mentor To Your Com wepetitor’, Helen Paul Advises

Institutions, individuals are welcome to contribute in memory of former President Rawlings