Former Hearts of Oak playmaker Winful Cobbinah has appeared in the Court of Tirana in Albania on Friday after being accused of forging documents after an award of the country’s passport became a controversial national issue, Ghanasoccernet.com can exclusively reveal.

The Ghana international midfielder vehemently rejects the accusation and has hired one of the country’s top lawyers Edmond Selimi to defend him in the matter that has led to a clash between the President and the Prime Minister.

Criminal proceedings against the talented player started some months ago but Cobbinah’s appearance in court to narrate the version of the issue was the first time he has been spotted in the dock.

It is not clear which documents Cobbinah is accused of falsifying but this has become a serious political issue.

The allegations of falsification of documents was hanging around Cobbinah’s neck before he was handed the Albania passport to help him play for his club in the Europa League.

Albanian President Ilir Meta is accused of granting Cobbinah citizenship without verifying that there are criminal proceedings against the footballer which has led to a national debate.

President Meta issue has escalated to the point that even the opposition party led by Prime Minister Edi Rama have accused the country’s leader of abetting in the forging documents to grant Cobbinah Albanian citizenship. 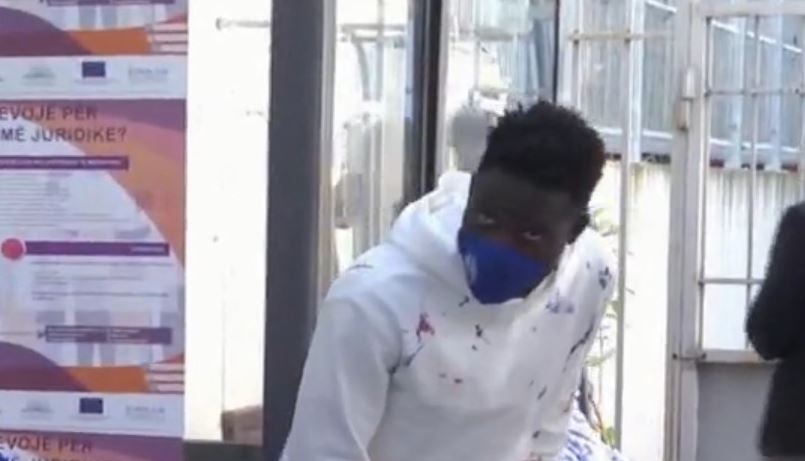 Cobbinah arriving in court in Tirana
The Albania president Ilir Meta granted full citizenship of the south-eastern European country to the Ghanaian who had just spent just two years in Albania as five years of continuous legal stay is required to apply for citizenship.

Given that the Ghanaian has not spent five years in Albania, the decision by the President of the country – who is also an ardent supporter of KF Tirana – to hand citizenship to the Ghanaian speaks volumes of how he is rated in that country.

Many also view this move by the Albanian government as an attempt to convince Cobbinah to switch nationality to play for them even though he has been invited to the Ghana senior national team a couple of times.

But with the softening of the nationality switch regulations of FIFA it could be a move by Albania for them to get him to play for them even though Cobbinah has not expressed interest in playing for him.

Other also say that  the Albanian club side Tirana want him to play in UEFA club competitions as a native so they can bring in more foreigners.

Cobbinah follows other African football players including the well-known Abraham Alechenu, Charles Ofoye and James Adeniyi who have all received Albanian passport in the past.

The former Hearts of Oak star played an influential role for the side as they clinched the  Katergoria Superiorelast season, ending a 11-year top-flight drought with their last success dating back in the 2008/2009 season.

READ ALSO:   Benitez To Keep His Job As Zidane Says He's Not Ready To Take Over

Since joining from Ghanaian giants Hearts of Oak two years ago, Cobbinah has been a mainstay of the side, scoring 10 goals in a combined 58 matches so far and making several assists.

The poster boy has been rewarded by the country’s President after granting his citizenship just within two years.

How Russia is skirting ban on nationality markers at Olympics